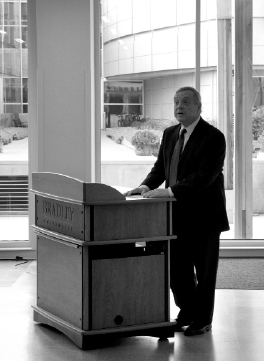 Sen. Dick Durbin, D-Ill, came to Bradley Oct. 18 for a question and answer forum with medical professionals, students and staff about the issues and concerns over the ability of Congress to govern.

“It was depressing, maddening, to serve the walls while waiting for the government to stop fighting,” Durbin said. “It’s going to take some give to solve this.”

The shutdown angered many in the public. According to Durbin, the GOP is at an approval rating of 28 percent, the lowest since the attempted impeachment of President Bill Clinton.

Durbin told the audience that the government was finally learning its lesson. Democrats and republicans alike had dealt with frustration of the American people over the shutdown and were now beginning to realize the great importance of bipartisan legislature.

“People are starting to realize that this is going affect your life,” Durbin said. “There are times when this government can give you a chance, and we need to keep the country believing in democracy.”

Durbin also explained the importance of the Affordable Care Act. He said he believed that health care is not just a privilege but a right, and Congress needs to defend that right by learning to legislate in the interest of the American people again.

Durbin is the second most powerful Democrat in the U.S. Senate and is the Majority Whip.

Political science professor Josh Ryan was in attendance for the forum.

“I thought it was interesting, though not particularly different from what’s been said by democrats publicly,” Ryan said. “Voters seem to agree on the point that Tea Party members of the Republican Party are too extreme, so Democrats have been repeating that point over and over again.”

In response to the concluded shutdown, a budget conference committee headed by Republican Congressman Paul Ryan was created to compile a new plan to figure out the debt-ceiling crisis.

Only a three-month plan was enacted to end the shutdown, and the committee must have a full plan by January, or Congress could face shutdown again.