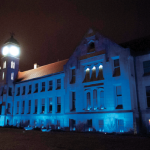 Bradley students set out Wednesday to shed some light on the topic of autism.

As part of the event, BSEA members and members of Bradley Association for the Education of Young Children (BAEYC) sold food, shared awareness and lit Westlake Hall in blue light for the evening.

Autism Speaks’ “Light It Up Blue” features fundraiser and awareness events around the world, including lighting up the Empire State Building and other buildings.

BSEA and BAEYC executive board member Sam Kintop said he started trying to bring the event to campus two years ago after working with autistic students for the last six years.

“I was amazed [at the success of the event],” the senior and early childhood and elementary education major said. “At 6 p.m., people immediately started showing up.”

Around 120 people visited the BSEA information table, and the organization raised around $800 for autism research.  Kintop said $200 will go to Autism Speaks, the world’s largest autism science and advocacy organization and the rest will stay local at the Peoria Academy for Autism.

“It went fantastically,” she said. “I’ve had a few people tell me [Westlake] looked really awesome. We’ll probably do this [annually.]”

“I think we just wanted to bring more awareness about autism to campus,” White said. “People know others with autism, but they don’t always know what it means … Overall, we wanted to teach people about autism.”

This is just the beginning of what BSEA and BAEYC want to bring to campus in terms of education, Kintop said.

“We want to get much more involved on campus,” he said. “These are great organizations with passionate educators.”

According to Kintop, a large kick-off event is in the works for fall 2014.

“We’ve got an amazing building, and amazing professors,” he said. “[The education major] is really fun – every day. We want to show freshmen that.”

But as far as this event goes, Kintop said it was great.

“We kept thinking bigger and bigger, but it the end, it was even bigger than that,” he said.

To donate to Autism Speaks, visit The Fieldhouse between 6 to 9 p.m. April 17. The restaurant will donate 10 percent of every meal to BSEA for autism fundraising.