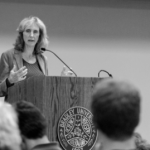 Author Tricia Tunstall came to campus Sept. 20 to speak about the role of music in the development of impoverished children.

Her book, “Changing Lives: Gustavo Dudamel, El Sistema, and the Transformative Power of Music,” was the subject of her speech.

It focused on music conductor Jose Antonio Abreu, who gathered a group of young Venezuelan children in 1975 and taught them to play classical music through a program called El Sistema. By 2005, El Sistema had more than 400,000 children involved.

Tunstall said Abreu’s inspiration came to him while he was studying at a conservatory for music. She said he noticed that although Venezuela had two national orchestras, almost all of the players performing were from nations other than Venezuela.

When Tunstall investigated El Sistema for her book, she said she realized the significance of the program on the youth in Venezuela.

“I did not believe that I would become a part of a real worldwide movement, and I do not use the word ‘movement’ lightly,” she said. “This system is really starting to reach the four corners of the world.”

The program focuses on gathering children from low-income communities and teaching them to play instruments.

Many of the children who begin the program have never played an instrument before, but their enthusiasm serves as the main factor of production and most students learn from other students, according to Tunstall.

Tunstall gave many examples of the students’ enthusiasm in her speech.

Every student gets to play in performances and is assigned to parts in songs that he or she can play.

Soon the hunger for music was so large that orchestras born from El Sistema were performing all around the world, gaining international recognition for Jose Abreu. In 2009, Abreu was awarded a TED award.

During his speech, Abreu said, “When you put a violin into the hand of a child, that hand will be too busy to pick up a gun. We are not trying to create musicians; we are trying to make citizens.”

Along with the award, Abreu received a large sum of money to use for the program. He insisted that the program be filed as a social development program because the fine arts suffer when economic crisis hits.

“It would be a really cool thing for the university to help with,” she said.