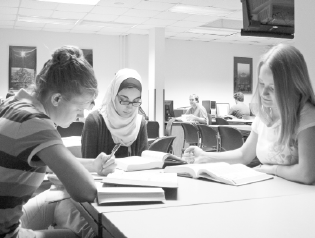 Women surpass men in number in nearly every field of study except engineering, according to the U.S. Department of Education. And Bradley reflects that trend.

Of the 20 students per average engineering class, there are usually only a few females. And that number hasn’t changed much over the past decade, said Assistant Dean in the College of Engineering and Technology Julie Reyer.

“We have seen those numbers increase very, very slightly since I came to Bradley [in 2002],” she said. “We tend to be in line with the national average. But here, it’s not uncommon to be the only female in the class.”

A reason for that, senior mechanical engineering major Alyssa Macuk said, is that female students are not often encouraged to become engineers.

“A lot of girls I know who are engineers have parents who are also engineers, so that’s why they do it. My dad is an engineer,” she said. “But even girls who are good at math and science aren’t encouraged to become engineers. My sister is like that, and she’s really outgoing. So people tell her, ‘I don’t picture you as an engineer,’ but how do they know what an engineer looks like?”

Even for girls who are not interested in pursuing a math- and science-heavy career, there is a lot of variation in engineering, Macuk said.

“I think there’s just not as much information on what you can do as an engineer,” she said. “People think, ‘I don’t like playing with Legos, therefore I shouldn’t be an engineer.’ But there’s a lot more to it than that.”

Since engineering still has a boys’ club feel, Macuk said the females have to be particularly motivated.

“Girls are good at math, and they are good at science,” she said. “But they have more of a depreciating attitude. With boys, if they all get a ‘B’ on a test, they’re happy with it. Girls will beat themselves up because they didn’t get the ‘A.’ Sometimes that leads them to change majors when they really shouldn’t.”

“In those high school years, especially for girls, there’s a stigma for being too smart,” she said. “They tend to play that down, and then they might not take the classes they need to get a strong start in engineering.”

Like Macuk, Reyer said there are many misconceptions about what engineering is.

“Back when I was in high school, if you liked math and science, you went to school to be a doctor, a scientist or an engineer,” she said. “But engineers tend to be more introverted. They don’t go around telling people what it is that they do, and that’s why people don’t really know about it. It’s just not who they are.”

From classes to a career, Reyer said female engineers have internal struggles to overcome for success.

“Scholastically, there’s nothing they need to work on,” she said. “But they have to overcome themselves and expectations about what they should be doing. They have to deal with working in classes and offices with more men than women, and people of the same gender tend to gather together.”

Reyer said females in engineering tends to receive more attention than gender divides in other majors.

“The numbers haven’t changed much since I was in school,” she said. “But I don’t hear much concern about how many more females there are in nursing, or why we have so few males going into elementary education.”

As to why there is still an engineering gender gap, Reyer said there are still limits to be pushed.

“Forty years before me, my mother was the only female accountant in the room. That’s not the case anymore,” she said. “Engineering just hasn’t broken the boundaries yet.”

Associate Dean of the College of Engineering and Technology Joe Emanuel came to Bradley in 1967, when there were no female engineering faculty members.

“Back then we had maybe one or two female students, no more than that,” he said.

Over the past few decades, Emanuel has noticed trends among the students.

“We went through a period where the only women we would get in the college were top high school students. Now we see more of a range,” he said. “It’s not only women who were in the top 10 percent of their graduating class. And that’s a good thing.”

“If you look at the GPA’s, there’s some in the top, some in the middle, but that’s how it has always been with the men,” he said. “So the women are beginning to look like the men in terms of distribution.”

From 1969 until 2002, there was only one female faculty member in engineering–Rita Newton. Reyer was the second to arrive, and now there are a total of five. And Newton was a key role model for female students, Emanuel said.

“She was here about 30 years, and a lot of the women who came in during the earlier years definitely saw her as a role model,” he said. “They could see themselves doing what she had done.”

In addition to a scholarship that every female in the college receives, Reyer said having female faculty has helped attract women to engineering.