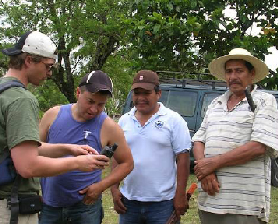 During the next five years, the 350 inhabitants of Nuevas Ilusiones, Guatemala will begin to see the meaning of their community’s name. A “new hope” is coming to Nuevas Ilusiones in the form of Bradley’s Engineers Without Borders chapter, and it’s bringing water.

Nuevas Ilusiones lies two miles south of the Mexican border in Guatemala. During the dry months of their seasonal year, the community cannot maintain an adequate water level to support their inhabitants due to distant water sources and unavailable resources.

The people have to purchase expensive bottled water because the water in the area has not been tested. The project managers at Engineers Without Borders headquarters were made aware of their situation.

Engineers Without Borders (EWB) is a nonprofit organization that began in 2002. A decade later, they have expanded from eight students and one professor to more than 12,000 members worldwide. They have 400 chapters at different universities in the United States. Their work has benefited countless areas of poverty by making installations, such as irrigation systems and water sanitation sites, using only donated resources and the minds of talented leaders.

Both Erin Westerby and Becca Wagner, senior and junior civil engineers, respectively, are this type of leader. Westerby, 2011-2012 president of EWB Bradley, was an integral part in the chapter’s revitalization. She went to Guatemala last summer with senior mechanical and electrical engineer Andrew Aubry. They conducted initial measurements of the area and built a relationship with the small town.

“It was such a great experience to meet the community of Nuevas Ilusiones,” said Westerby. “It really puts everything in perspective.”

Westerby was succeeded this year by Wagner. According to Wagner, the EWB Bradley team has 30-40 students, two professors and around 10 professional engineers from the Heart of Illinois chapter. Wagner said the chapter is still analyzing possible remedies to Nuevas Ilusiones’ problems.

“We are looking into several solutions, including pumping the water from a stream 2 km away, digging a well and possible rain collection,” she said. “We are also working on a way to treat the water to avoid illness in the community.”

The chapter’s focus this year will be finalizing the project’s design and raising money. Wagner said that ideally the chapter would return to Guatemala in May to implement their solution if the funds were available. In addition to the sizable donations from the Heart of Illinois chapter, the EWB Bradley chapter must raise enough money to send the installation team to Nuevas Ilusiones before that time.

The EWB Bradley chapter is hosting a Subway night from 4 – 8 p.m. on Sunday. They also have open design and fundraising meetings from 6:30-8:30 every Tuesday in Jobst Hall RM200.