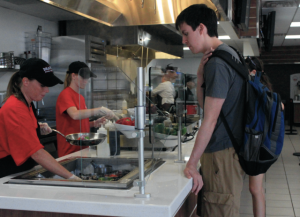 Mixed reviews about the new food services on campus, from the change in hours of operation to the controversy of the Chick-fil-A, are prevalent among students.

However, it seems as if the hottest topic in these reviews is the increased prices on items at Center Court and P.O.D. Market, located in the Student Center. Vice President for Business Affairs Gary Anna said the pricier costs are predictable in these places.

“As you might expect, pricing is first based on cost and then handling/stocking and replacement cycles,” he said. “Convenience items on a campus like ours will never match dollar-for-dollar, penny-for-penny [with] the quantity discounts that a Wal-Mart obtains. Regional grocery chains can’t even compete; but having said that, our purchasing power is greatly enhanced because of supply-chain features associated with our dining services contract with ARAMARK.”

Students without access to a car or those living on campus may find themselves purchasing groceries at P.O.D. out of convenience. But the prices are steeper. A 12 pack of Pepsi at P.O.D. costs 70 cents more than at CVS, and $2 more than at Wal-Mart. A 14 ounce box of General Mills cereal weighs in at $4.89 at P.O.D., nearly $1 more compared to CVS and $2 more than Wal-Mart.

“The hours and prices of all of our locations are based on student feedback we received from surveys conducted campus-wide in the 2011-2012 school year,” he said. “We conduct a competitive analysis twice each school year and, based on the fluctuation of product pricing, continue to adjust accordingly in order to remain at the market price.”

Even after these surveys, some students said the increased prices at P.O.D. are too steep.

“It definitely is higher,” said senior accounting major Seth Elsasser. “I was in [P.O.D] once and noticed a guy in front of me freaking out because a package of juice was $5.”

Other students said the costs are justified.

“It’s more pricey compared to what Center Court [prices] used to be, but there is a lot more selection [at P.O.D],” said senior accounting major Drew Giles. “It seems to be higher class now.”

While reviews about P.O.D. are varied, many students said the new prices in Center Court are too high.

“It’s just ridiculous,” said sophomore television arts major Paige Misselhorn. “[The prices are so high] for no reason. I feel like the food isn’t better. It’s not as healthy as last year either.”

“We’re paying more for the same thing,” he said. “I’ve only been [to Center Court] twice this year and I probably won’t be back again.”

Wilton said these prices on campus are tailored to be convenient to students.