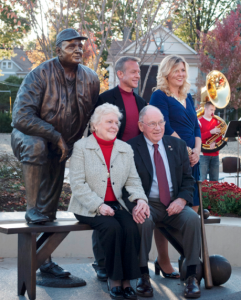 More than two hundred Bradley students, alumni, faculty members and community members joined together to honor the success and legacy of a former university coach on Founder’s Day, Oct. 12.

Commemorating A.J. “Robbie” Robertson, a coach of football, basketball and baseball at Bradley from 1920 until his death in 1946, a bronze life-size statue of Robertson was unveiled. It stands at its permanent location in the cul-de-sac located between the arena and the Main St. parking deck.

“We are extremely humbled,” said Robertson’s son William ‘Corky’ Robertson. “And the family is honored. We are all very, very pleased with the finish of this statue.”

Prior to the unveiling, the university band performed and University President Joanne Glasser welcomed guests with opening remarks.

“This piece of art is totally designed, crafted and fabricated on our campus and when you see it, it is jaw dropping, indeed it is beautiful.” Glasser said. “… [A.J. Robertson] has been called the finest sports coach, three sport coach, in American history any time, anywhere.”

The statue, which stands approximately 6-feet tall and weighs 500 pounds, was designed as a tribute to the coach who brought Bradley to national recognition. Robertson, who also served as the athletic director, was beloved and respected, and had the most wins as head coach in Bradley basketball history with a 316-187 record.

“Being around Robbie was like being in the presence of God,” said 1949 Bradley graduate Pete Vonachen. “There are so many men that are better men now because of Robbie’s efforts. Robbie was an icon, and I never heard any players say anything bad about him because everyone respected him so much.”

Among friends and family in the crowd was Joe Stowell, Bradley graduate of 1950 and formre Basketball coach. Stowell said he watched Bradley basketball games when he was young and saw the influence Robertson had on the team.

“He was firm, but he upgraded the program,” he said. “He was tough on [the team] but it paid off in the end. Robbie was one of a kind, and I think [the statue artists] did a real good job.”

The sculpture was created on campus by Associate Professor of Sculpture Fisher Stolz and Adjunct Professor Jaci Willis in the Heuser Art Center. The project took more than two years of planning and sculpting.

Since the Field House was torn down in 2008 to make way for the Renaissance Coliseum, Executive Director of Donor Relations Kathy Fuller said they wanted to find a way to continue to honor Robertson.

To view additional photos and  a video of the unveiling visit bradleyscout.com.