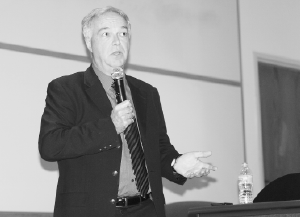 Engaging students with his witty, entertaining and informative speech on topics ranging from the history of the Constitution to journalism in a digital age, President and CEO of the First Amendment Center Ken Paulson visited Bradley for the Fall 2011 Robison Lecture held in the Neumiller Lecture auditorium on Wednesday.

“Hearing his thoughts on law and journalism was helpful and easy to relate to,” sophomore journalism major Mallory Hartigan said. “He was in our class yesterday and he’s really funny.”

Paulson, a graduate of the University of Illinois law school and the former news editor of USA Today, spoke about his accomplishments from law school to working as a journalist and the importance of topics including honest journalism and the first amendment.

His speech began with a brief and humorous introduction engaging students and informing them about his background as a law student and his switch to journalism.

“I can tell you, I had a perfect record,” he said. “Everyone I defended went to jail. Sometimes life gives you a nudge in the right direction.”

The lecture also included the direction of newspapers in the modern age. Paulson argues, with a clever analogy, that journalism and newspapers will survive and evolve into different forms.

”Today the iPad is the leading news and communication device in the world,” Paulson said. “And you know what, Thomas Jefferson had an iPad. Of course he called it a newspaper. It was cutting edge at the time. Newspapers were the iPads. Newspapers will not die. They will change. Technology will lead to changes in design, platform, and delivery but their core mission of informing and engaging the public with news and information is very much alive.”

Paulson touched on the fundamental issues about the duty of journalists and bloggers as the upholders of first amendment rights, which was the central focus of the speech.

“We defend truth, justice, and the American way by reporting,” Paulson said. “Reporters have courageously covered stories that may have otherwise gone untold.”

Paulson ended his speech by stressing the need to uphold the rights the founding fathers of the US fought for through the responsible use of the freedom of speech.

“It was really entertaining, interesting, and engaging,” he said. “By far the best one yet.”