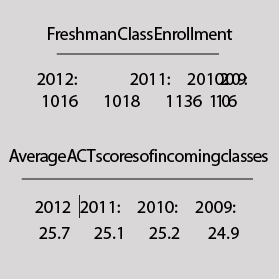 For the second year in a row there are several empty beds in residence halls.

There are only 1,016 students in this year’s incoming class. While that is only a few students less than last year’s count, it falls 120 students short of the 2010 freshman class.

Director of Business Affairs Gary Anna said recent enrollment targets have ranged between 1,050 and 1,100 students, meaning the past two years enrollment has fallen short of projected goals, a challenge that may affect the university budget.

“Students pay a little over 80 percent of our educational operational expenses . . . and many eat and live on-campus,” Anna said. “In many cases, if students aren’t here, we don’t incur certain types of expenses.”

Anna said the administration is in the process of assessing how lower enrollment will affect the university budget. However, he assures any adjustments will not impact the quality of the student learning experience.

“While students are critical to the financial health of a university like ours, we also have donor and external support as well as a $249 million dollar endowment that subsidize everyone’s educational costs,” Anna said.

Although enrollment numbers are less than years past, former interim of Vice President of Enrollment Management Susan Andrews said the incoming class is strong academically.

Anna said even though the class size is smaller than in other years, they have a higher projected retention rate due to the average ACT score.

“Our fall 2012 class is also most capable as measured by ACT scores and our positive retention rates are also critically important to our financial profile,” he said.

Andrews said several factors may have affected the ability to meet enrollment goals, but lack of interest was not one of them.

“We had record visit days and were ahead in the enrollment process last year,” she said. “Which is a good sign of interest… but a lot of students are looking at more schools and money is playing a larger role in their decisions.”

Even though many students expressed interest in Bradley, Andrews said there were more “summer melts,” or students who withdrew their enrollment a few months before classes started, than in years past.

“A number of students always withdraw due to money,” said Admissions Representative Kevin McClelland. “They aren’t able to comprehend the cost until they see their bill, and when they do, reality hits hard. So some students may have withdrawn earlier because we sent out bills earlier. Some students just can’t make up their minds, so they put down two deposits at two different schools, which is frowned upon at colleges across the country. If that happens, sometimes Bradley comes on the losing end of that.”

Moving forward, Andrews said the admissions office is working hard to recruit students by continuously improving print publications and expanding recruiting scopes. Andrews also said for the first time there is a full-time Bradley representative in the St. Louis area as well as someone on the East and West coasts.

In addition, a new vice president of enrollment management will join the admissions staff next month.