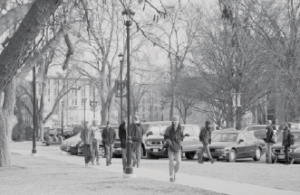 A recent university report states more than 96 percent of the freshmen, class of 2016, returned to campus for a second semester.

The Center for Student Support Services has calculated the total number of freshmen retained at each semester for more than a decade. A total of 981 freshmen will continue their freshmen year at Bradley, resulting in a mid-year retention rate of 96.8 percent.

The center, along with its Executive Director Barbara Carraway, uses the retention rates data every year throughout the university. Carraway said the mid-year retention rate is used to ensure Bradley is staying consistent.

“The mid-year retention rate just lets us know how we’re doing in comparison with the other years,” Carraway said. “If this number were way off from the other years, we’d need to look at why that was happening.”

Interim Vice President of Student Affairs Nathan Thomas said the fact that the retention rate is “truly a mark of distinction for our campus.”

“After the early registration period for the spring is over, we contact students who were freshmen in the fall and who were eligible to register for spring but have not,” she said. “[We want] to see why they have not registered, and if they need any assistance.”

The retention numbers are broken down by gender, race, college and decile of incoming freshmen in their graduating high school classes among a number of different analytical groups.

The numbers in the categories can be skewed by population sizes, Carraway said.

“We had four American Indian students in the freshmen class last year, and one left,” Carraway said. “That makes the retention rate 75 percent, but that’s [not representative because the sample is too small.]”

One of the categories analyzes the retention rates within specific majors, including the largest number of students leaving the university from the university academic exploration program major at 15 students.

The Center for Student Support Services not only uses the data for the parent’s board and incoming prospective students and parents, but they also use the data to improve the retention rates across the board. According to Carraway, they use the numbers to target what areas may need “special initiatives.”

“We look at what groups might need special attention,” she said. “Including what programs the university should be looking into to improve [the rate], like support groups.”

Thomas said he recognizes the importance of an above-average retention rate for students is the byproduct of every part of the university.

“Retention is an extension of a student’s experience,” Thomas said. “From facilities staff to support staff to the faculty to student organization, each person plays an important role in the retention of our students.”