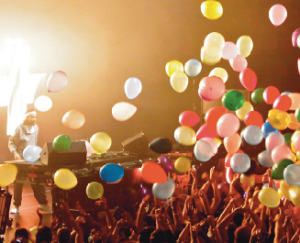 Girl Talk’s Tuesday night performance sold 186 tickets on the day of the show, but ticket sales did not meet expectations.

Girl Talk, along with Breathe Carolina and The Ready Set, performed at the Arena for the Activities Council of Bradley University’s Spring Concert which sold the lowest amount of ticket sales ACBU has seen in recent years.

“I thought it was awesome, but the turnout wasn’t what we hoped,” said ACBU President Bryant Au. “None of the circumstances were in our favor. It is unfortunate that the numbers don’t reflect how good of a show it was.”

Girl Talk’s concert sold 249 less tickets than the fall concert, which sold a total of 1,134 tickets, 600 of them to students, faculty and staff.

“It was a good concert,” ACBU Concert Coordinator Matt Olivero said. “I still would have liked to have seen more students but we did everything we could to market the event and spread the word to get people out to the show.”

Although there were about 900 tickets sold, Olivero said there were only about 400 students who were present while Girl Talk performed.

Junior civil engineering major Derik Leary only attended the concert for Girl Talk’s performance. He said that regardless of the number of students who attended, the experience of the concert was unchanged.

“It was so much fun,” she said. “Almost like one big party. I had no idea that Breathe Carolina was so good. They had all different types of music, plus all the music was their own.”

Because there was a low attendance of Bradley students, ACBU concert coordinators decided to open the general admission pit to all ticket holders for Girl Talk’s performance.

“The ultimate decision behind that was that we wanted to see the floor filled,” he said. “Having more people in the pit meant that we would have that big party atmosphere and we wanted everyone to go out there and have fun.”

ACBU member Deshawn Cason said those who attended the concert had fun.

“I think the concert went well and it was better than I expected,” he said, “I liked it and I definitely think the students that came enjoyed the show.”

Director of Student Activities Michelle Whited said she agreed that students who attended had a good time.

“If more people were there it would have been a higher energy show,” said Whited. “The more people you have in a venue the stronger the experience is. The people who were there last night had a ball.”