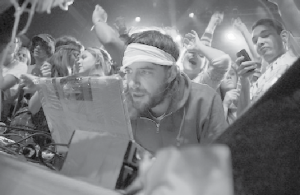 It has been nearly two weeks since tickets for the Bradley University Student Activities Spring Concert featuring Girl Talk,  Breathe Carolina and The Ready Set went on sale to students, and sales are not as strong as past shows.

As of 5 p.m. Thursday, only 490 tickets total had been sold, 30 of them to the public. In comparison, 1,100 tickets were sold on the first day for the Jason Derulo and Mike Posner concert last spring.

In one day Taking Back Sunday sold 200 tickets, about half the amount that Girl Talk has sold in two weeks.

“I’m not worried,” said Director of Student Activities Michelle Whited. “We’ve seen an indication from students that they are not in a rush to get tickets because of the general admission pit. I think this will be a show where students will buy tickets the day of the concert.”

President of ACBU Bryant Au said he agrees with Whited.

“I expect for ticket sales to go up closer to the concert date and that there will be a large number of walk-ups,” he said. “I would encourage people to buy tickets soon because when they buy tickets it will determine when they will be able to enter the arena using the flight-system.”

Although ACBU is not worried about the current low ticket sales, some students believe that it is a reflection of interest.

“I think it’s because of student interest,” said junior marketing major Shayne Christe. “I don’t really want to pay to watch some guy DJ and I don’t know friends that are going . . . Actually I’m surprised there are even 400 tickets sold.”

Freshman management and administration major Holly Alguire said she had no idea who Girl Talk was and she isn’t planning on attending.

“I think ticket sales are low because of the group,” she said. “My brother showed me who it is and it seems cool, but no one is going.”

Whited said that another reason ticket sales are low is because ACBU has not started a push for public ticket sales. In the next week, they will be running Facebook advertisements, post flyers in the malls as well as use City Link Bus, Billboards and radio advertising.

“[Concert coordinator] Matt Olivero came up with the idea of advertising on buses and it’s something we haven’t done before,” she said. “The whole thought was that we could reach the high school age group.”

In addition, ACBU will be placing advertisements in other university student newspapers including Illinois State University, University of Illinois, Eureka College and Illinois Wesleyan University.