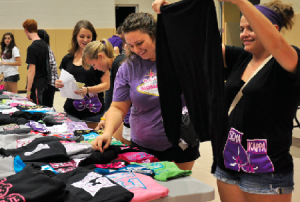 While students were split on whether the event worked to diffuse parties, greek and non-greek students alike agreed that Greek Night BU was an enjoyable trade-in for the typical LNBU.

“There’s a lot of Greek stuff going on, but it doesn’t seem secluded,” said senior graphic design and printmaking major Christine Montgomery, who is not involved in greek life. “But I don’t think it’s going to stop Blackout Monday. It’s just going to postpone it.”

LNBU employee Teresa Bruno said Greek Night BU stood out from other events she had worked.

“People are more social at this one, everyone’s talking,” she said.

“It was great seeing everyone together, and a lot of people were interested in it,” he said. “But I think that if the event was two to three hours long instead of five, everyone would have stayed longer.”

“Typically in the past, on Blackout Monday, there was a lot of drinking, especially by people who didn’t really drink before,” she said. “Greeks and non-greeks do it. As an RA, I would have to sit in my room and worry that someone would come back severely drunk. As a member of the executive board for my sorority, it was a problem because if new members get in trouble, the whole sorority or fraternity gets in trouble.”

Harrison said she wanted there to be an alternative form of Blackout Monday-night fun.

“I wanted to do this because it would at least curb the drinking, because we’re providing an opportunity to do something else,” she said. “At least this way people could have food in their stomachs and somewhere else to go.”

Harrison said one of the main challenges for Greek Night BU was spreading the word to students not involved with greek life.

“I was concerned when we heard people thought it was only for greeks,” she said. “We wanted it to show other students who we were, and also for other fraternities and sororities to socialize.”

“This event was more catered to the greek community, so we brought in shops to sell greek apparel, we had a photo area, greek banners and letters,” he said. “Very similar to Late Night BU, but we tweaked it to make it more appropriate for a greek audience.”

Another factor separating Greek Night BU from any other Late Night was the increased budget.

“A typical Late Night BU budget is about $7,000,” Gotto said. “This event had an additional $5,000 from [the Student Activities Budget Review Committee].”

Funding for Late Night BU comes from a $65 fee that every student pays each semester, about 18 percent of which is set aside for the events.

The SABRC Chairperson, junior Crystal Rains, said the group contributed to Greek Night BU because they felt it was a worthy cause.

“It was brought to us as an idea to address a prominent issue on our campus, not only by Greek members of the community but by students and residence hall staff who in recent years have really begun to fear for the safety of those around them on Blackout Monday,” she said.

Greek Night BU drew in 1,880 people, and Rains said that proved the money was well spent.

“We contributed the money because we wanted to see the event make a name for itself, so that it could succeed in future years as well,” she said. “It is never a good thing for an event to  fail from the start, when it’s cause is so well intended.”

“I thought it went really well,” she said. “It was packed with greeks, the food was really good and the basketball game was fun to watch. I would go again next year if they hosted the event again.”