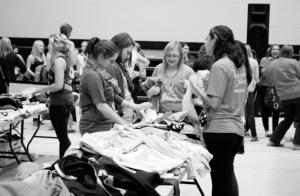 on-greek students this past Monday, though many students questioned its effectiveness.

Greek Night BU was created in 2011 to provide both greek and non-greek students a safe environment in which to celebrate the end of fraternity and sorority recruitment, Director of Wellness Programs Melissa Sage-Bollenbach said.

In spring 2011, a greek student approached the Late Night BU planning staff with the idea of doing a greek version of Late Night BU.

“[The student] had concerns regarding excessive high-risk student drinking on that Monday,” said Sage-Bollenbach. “[The student] felt that if the greek students and their new members had somewhere to go and something to do other than going to parties, we might be able to reduce some of the negative consequences related to high-risk drinking.”

However, some students feel this strategically placed Late Night BU does not accomplish its goals.

“[Late Night BU] gives people a way to have a safe night, but at the same time people are going to be drinking,” said junior health science major and Sigma Kappa member Dana Pine. “It’s a valiant effort, but it isn’t fully accomplishing the goals it is in place to do.”

“I don’t think Late Night BU prevents drinking, but it is a fun activity for those who choose not to drink,” he said.

While Bradley Wellness Programs acknowledge some feel this way, the greek-themed Late Night BU will continue.

“I believe it’s important to continue this event into the future to provide a celebratory social event for greek life and also for non-greek students to have a better understanding of what Greek life is all about,” Sage-Bollenbach said.