By Samantha Pallini on September 6, 2013 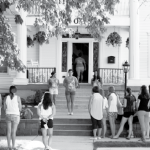 This has been a year of broken records for Bradley’s class of 2017, and sorority recruitment, which wrapped up this weekend, was no exception.

The Panhellenic sororities welcomed more than 400 women to the formal recruitment process Aug. 30, which was the Friday of the first week of classes. Many greek members said their initial concern was that many women would not want or be able to participate because of the immediacy of the process, especially since last year’s formal sorority recruitment took place three weeks after the start of classes.

“With the diversity of options, we were not surprised at the success of the recruitment,” Coy said. “We were somewhat surprised in the surge of freshmen women choosing to participate.”

Nearly half of the class of 2017’s women participated in the recruitment process. Last year’s allotted quota was 34 women, but with this year’s unexpected participation, the quota was set at a record-breaking 42 women per sorority chapter.

“Having a quota of 42 women is absolutely insane,” said senior public relations major and Director of Public Relations for Panhellenic Council Shelby Duitsman. “I would have never imagined that so many women would join our Panhellenic sisterhood. Our chapters really outdid themselves this year.”

Six of the seven sororities met or exceeded the quota, making it the largest quota ever set for Bradley Panhellenic chapters.

“It is exciting to see the growth and recruitment success,” Coy said. “A sorority creates a wonderful support system and community for freshmen women. I am looking forward to seeing what these newest members will bring to our community.”

“It was amazing to see the women find a chapter that was best suited them, and to see the chapters on this campus better themselves with the addition of their future leaders,” Ingrum said.