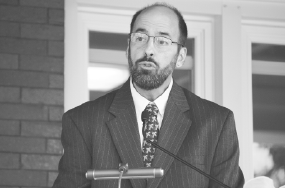 The Jewish community is reinvigorated with the creation and dedication of the new Hillel house, which accommodates the needs of the active Jewish community found at both Bradley and in the greater Peoria area.

The house was inaugurated Wednesday with speeches by President Joanne Glasser and Hillel faculty advisor Seth Katz. Both Glasser and Katz highlighted the impact this building will have uniting the Jewish community.

“We have dreamed, waited for this house and this day, and finally it is here,” Katz said. “It has gone from a dream to reality.”

Hillel will be a place for students of all religious and ethnic backgrounds to gather, interact, eat and learn together in an environment open to diversity.

“Hillel will become a new home for our Jewish students and the Jewish community,” Glasser said. “There will be prayer and there will be joy. Students will grow in the understanding of each other.”

The creation of the 4200 square foot building took ten months and boasts numerous amenities for visitors. On the first floor, the building contains an area seating up to 100 people for dinner, meetings and other events.

“The best part of the house is the ability to fit people, unlike at the old house,” political science and economics major Ben Azriel said. “It’s nice to have a lounge for meetings or to just hang out.”

“Judaism is not a religion, but a way of life,” Corporate Board President Yona Lunken said. “Many aspects of life including learning, charity, growth and how we treat each other all come together here.”

“With the new building, hopefully more students will become involved with their faith,” President of Hillel Zach Dalin said. “We want to bring people together at a central location where everyone is welcome.”