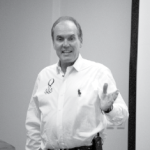 His life was no walk in the park, so he decided to run instead.
The Bradley Running Braves hosted three-time United States Track and Field Olympian, two-time World Cross Country Champion and Hall of Famer Craig Virgin Nov. 8 in the Marty Theater for a speech about a running career defined by overcoming adversity.
“The Running Braves’ goal was to host an inspirational event for the running community and, of course, high school athletes [who were in Peoria for the cross country state finals],” Bradley Running Braves President Vince Tagare said.
From baling hay to herding cattle by running like a “white Kenyan herdsman”, Virgin said it was during his early years as a small-town Illinois farm boy that his work ethic and running foundation were built, even though running career aspirations were not on his radar.
“On the farm, I never lacked for any work,” Virgin said. “I was always working in less than ideal conditions, which helped build mental and physical toughness.”
Virgin said that mental and physical toughness was needed to help him fight a congenital urological disease he was diagnosed with during his childhood.
“My doctor told me [in order to recover] I was going to be a part of my body management,” Virgin said. “At an early age, I learned how to listen to my body, as well as how to ignore my body.”
While a reconstructive surgery in 8th grade helped cure his health issues, Virgin entered high school recognizing his next challenge: basketball. He knew his talent wouldn’t get him a position on the basketball roster, but running might.
“I figured the only way to get on the team was to outrun everyone,” Virgin said.
Eventually his basketball coach called up the cross country coach, and Virgin’s competitive running career took off. Virgin became a five-time Illinois high school state champion and, more than four decades later, he remains the record-holder in Illinois Boys Cross Country with a 13:50.6 time for a three mile run.
“As a small-school, downstate athlete, I never thought I couldn’t compete,” Virgin said of his high school career. “I had a God-given gift, but I worked hard to develop that gift.”
For college, Virgin attended the University of Illinois and won nine Big Ten Conference championships, in addition to the 1975 NCAA Cross Country Championship. The nine-time NCAA All-American went on to a professional running career.
From qualifying for the 1976, 1980 and 1984 U.S. Olympic Track and Field teams in the 10,000 meters to winning the 1980 and 1981 IAAF World Cross Country Championships, Virgin’s running accomplishments helped propel him into numerous halls of fame.
Tagare said Virgin was the first of an annual speaker event named “Living Legends of Illinois”. The Running Braves will be hosting an Illinois track and field Olympian at Bradley as a way to help people understand the “longstanding running tradition this state has.”
“Virgin delivered a great message on mental toughness and the refusing to quit,” Tagare said.
But Virgin said every person has their own obstacles.
“Adversity is a part of the fabric of life. You’re going to have disappointments and hardships,” Virgin said. “It’s the little habits in life that determine the champions from the others.”