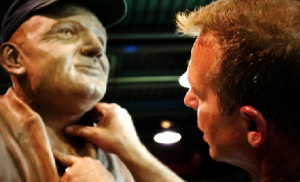 Next fall Lydia Moss Bradley won’t be the only statue on campus.

A.J. “Robbie” Robertson, who coached football, basketball and baseball from 1920 until his death in 1946, will have a statue placed on the west side of campus near the Renaissance Coliseum.

“I think history is important and A. J. Robertson is especially important in Bradley history and this is a way to keep it alive,” said Executive Director of Donor Relations Kathy Fuller, who is overseeing the project.

Robertson, who also served as the athletic director, was a beloved and respected coach. He also has the most wins as head coach in Bradley basketball history with a 316-187 record.

“It carries on the tradition that people have a tendency to forget,” said Robertson’s son William ‘Corky’ Robertson. “The name will be on campus and generations coming up can see the statue and ask ‘what did he do?’ and see that he brought Bradley to national recognition.”

The bronze statue will be revealed to the Bradley community during next year’s Homecoming Weekend. Upon completion, the statue will stand at 6-feet tall and is expected to weigh 500 pounds.

The life-size sculpture is being created on campus by associate professor of sculpture Fisher Stolz and adjunct professor Jaci Willis in the Heuser Art Center.

“We went to the Strawberry Field Festival in Elmwood last summer,” Stolz said. “We began sculpting the armature there so people could see the process.”

Stolz and Willis have been working on the sculpture during spare time in between teaching classes throughout the week and will continue working until the unveiling in October. The entire project will require more than five molds including molds of rubber, plaster, ceramic shell and wax.

Willis said they have gone through more than 500 pounds of clay so far and it took a week for Fisher just to add hair to the sculpture.

Since the Field House was torn down in 2008 to make way for the Renaissance Coliseum, Fuller said they wanted to continue to honor Robertson.

“When the Field House came down, we were looking for a way to continue that dedication,” Fuller said.

Corky Robertson said he is appreciative of the university’s effort to honor his father.

“The family is very humble and proud,” he said. “It’s really a great feeling. Not everyone will get a statue of their father.”