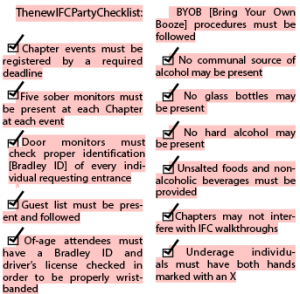 The “Perfect Party” on Feb. 22 was planned to stage a safe, social environment for leaders in the greek community while answering the members’ questions. It was hosted by Pi Kappa Alpha fraternity house from 10 p.m. to midnight, and the president, social chair and risk management chair of each IFC fraternity were required to attend.

“We hope to demonstrate to the greek community how greek parties should go,” Alex Kapustka, president of IFC, said. “This is how they are supposed to function and we want to make that clear to avoid any confusion or future problems.”

The goal of the Purdue University-inspired event was to showcase how social gatherings in the Bradley greek community should function according to the recently passed IFC risk management policy, said Associate Director of Greek Life Jesse Koch.

“This concept was developed at Purdue,” Koch said. “Basically, IFC co-sponsors an event with the risk managers so that guests can see with their own eyes what it should be like when all policies are followed.”

Koch also said the party was to prevent problems that could arise at future gatherings.

“We want to clear the confusion and minimalize future issues,” he said. “If they’re all here, they’ll all be able to report back first hand. The Perfect Party is the ideal representation of just that, a party.”

The two-hour event enforced all of the new IFC guidelines and exposed greek members to appropriate procedures of party-hosting. Several students said they were less than impressed and said they felt the new policy to be too restricting.

“Honestly, I don’t think it’s going to be effective. I just think people want to have the most amount of fun as possible,” he said. “This is not fun. No college kid wants restriction by this kind of process. They’ll just pregame beforehand.”

“When the idea is to help out underage drinking, this just forces it into less controlled settings of binge drinking,” he said. “That’s not safe or smart.”

Others said they felt this was not only a bold action by the university, but that the target audience seemed to focus only on fraternity members.

“This [moratorium] makes it look like it’s entirely greek life’s fault when 90 percent of the people at the parties are non-greeks,” said sophomore criminal justice major Zak Sebastian of Lambda Chi Alpha fraternity. “I don’t think it’s really going to have a great effect.”

“When we go through the pledge process, we are taught to look out for each other and to function as a brotherhood,” he said. “We’re not the ones who are getting out of control at these events because we’ve got each other’s backs. It’s the people who don’t have their friends looking out for them that are getting into problems.”

Interim Vice President for Student Affairs Nathan Thomas said the fraternities were very helpful during the writing and initial implementation of the new rules.

“I think the way BU has reacted is student-driven and student-focused,” he said. “We’ve seen the student leadership step up and take charge. It’s a learning process, and we just want everyone to try. This isn’t about taking away, it’s about trying to keep promoting the positive values of fraternity and sorority life.”

The IFC will be posting and distributing checklists and the revised bylaws for each fraternity house to reference. Bradley police will collaborate with Koch and IFC to enforce the procedures and ensure safety on campus.