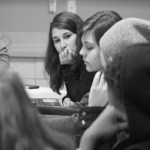 As the Religious Freedom and Marriage Fairness Act passed the Illinois House of Representative’s Executive Committee on Feb. 14, Illinois became one step closer to proposing the topic to the governor for approval.

If passed on the House floor, Illinois will join nine other states and 14 countries worldwide that have recognized same-sex marriage on a legal level.

“This isn’t something that would happen at home [in Texas],” Nelson said. “[I like that I’m] in a place where gay marriage can be talked about in politics and not be a joke.”

The bill does not require religious officials to recognize the unions and allows them the right to refuse to officiate if it goes against their beliefs.

The issue has divided the House and even the Republican and Democratic parties. Illinois Republican Chairman Pat Brady shocked Republicans by stating that they “were on the wrong side of history on this one.”

His stance may cause him to lose his position, as Republicans are meeting on Saturday to consider his removal.

Regardless, DiMaggio said she thought some Republican support was a very positive move.

Bradley’s own Caterpillar professor in political science Emily Gill wrote a book arguing the legalization of same-sex marriage in 2001. She said she began to see links between the way the U.S. prohibited religious intolerance but continued to impose a religious idea of marriage on its citizens.

“I will be delighted when my colleagues, who do not currently enjoy full marriage equality, enjoy the same respect and benefits that my own married relationship does,” Gill said.

Junior health science major Alex Warden-Michl said she thinks the bill can be helpful for all Bradley students. She said the bill might help “different religious groups on campus have broader perspectives.”

“I was talking to an older member of the community [who was around] during the AIDS epidemic,” Pinsky said. “Back then, [being gay] was scorned and shameful. Now we’re living in a time when it’s more accepted. It’s not going to hold us back.”