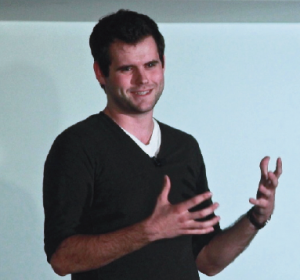 While the average 21-year-old is concerned about upcoming tests and what and when their next meal will be, Zahl Wahls has a different daily agenda.

Wahls, a former engineering student at the University of Iowa, has spent the last year touring universities across the nation speaking on behalf of his family and the rights of same sex-couples. Wahls shared his journey and beliefs to more than 200 students in the Student Center Ballroom Wednesday night.

In 2011, Wahls became a viral sensation after testifying in front of the Iowa Judiciary Committee in support of marriage equality. His statement was recorded and uploaded to YouTube that same day, soon to become the most watched political video in 2011.

Most recently Wahls appeared at the 2012 Democratic National Convention, after being invited by the Obama for America campaign team.

“It was a huge honor to speak at the Democratic National Convention,” he said. “I still remember watching the 2004 GOP convention and listening to all of these politicians say this really nasty stuff about my family and me and what it meant to have same-sex parents. It felt good to set the record straight. No pun intended.”

Wahls said after presenting his testimony more than a year ago, he had no idea that his decision would lead him to the life he is living now.

“I didn’t even realize my remarks before the Iowa House were being recorded,” he said. “I didn’t find out they had been uploaded to YouTube until the video was going viral. My friends found out before I did.”

During his presentation, Wahls told students about the events that occurred the morning he realized the impact his testimony had made.

“I woke up to 12 missed calls, 300 emails and 500 friend requests that would double my Facebook friends,” he said. “As I went to pour my coffee I received another phone call. I answered and it was CBS producers. They wanted to fly me out for an interview the next morning… It was at that moment that I started to realize, wow, this is a big deal.”

In the fall of 2011, Wahls made the decision to withdraw from classes after being offered a publishing offer with Penguin Publishers to write his own book. His book, titled My Two Moms, went on to become a national bestseller.

“My moms definitely understood why I withdrew [from the University of Iowa],” he said. “It’s a critical time for [Lesbian, Gay, Bisexual, Transgender and Queer] rights in this country, and one of two things is going to happen. Either we will overcome the politics of fear and division that folks opposed to LGBTQ rights have built up and we’ll continue to see major changes over the next five to eight years, or we’ll see the pace of change slowed way, way down and it’ll take a generation to recognize the inherent worth and dignity of LGBTQ people.”

At the event Wahls addressed his struggles in school due to bullying and common questions he receives about having parents of the same sex. He said many people ask questions about how he was raised in a household with two moms.

“In my mind learning how to shave isn’t so different from learning how to drive stick, it’s not a big deal,” he said. ”There were men in and around my life and I had plenty of great role models in my life. The difference between me and my peers with straight parents is probably that I’m really good at putting the seat down.”

Now writing, speaking and advocating full time, Wahls said he gains motivation from the people he has influenced along the way.

“After I’m done speaking, people usually come up and mingle and talk,” he said. “I’ve been blown away by how people have reacted to my story: young LGBT people who understand that they can have children, servicemen who are no longer scared about the possibility of serving with openly gay people, parents who want to re-open a dialogue with their lesbian daughter. It’s something special and an incredible privilege to share these moments.”

Wahls said he is planning to return to school full-time next fall and said he hopes the idea of someone speaking out about their same-sex parents will be more accepted in the future.