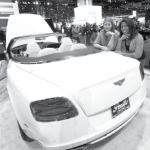 Twelve Bradley students put their minds into gear this year and became 2014 Chicago Auto Show interns.
The Chicago Auto Show is a family-friendly annual event that has been hosted by the Chicago Automobile Trade Association since 1935 to showcase nearly 1000 vehicles from Bugattis to mini-vans. Displays offer demos, free gifts, food, drink and interactive simulations.
“I was expecting the room to be filled with older gentlemen wearing suits,” said senior public relations major Shelby Duitsman. “What I didn’t realize was that the show appeals to people of all ages. There are so many families at the show who bring their little children who love to look at all the cars.”
The twelve interns were thrust into the field, completing tasks for executives, media outlets, customers and clients.
“We covered press conferences, created press releases that focused on automobiles revealed at the Chicago Auto Show website, generated Facebook, Twitter, Instagram and Vine posts for the Chicago Auto Show accounts, wrote blog posts, and created media packages and credentials for journalists,” said senior public relations major Erin Guth.
The show was separated into three segments and allowed for two waves of interns. The first eight interns participated in the Media Preview, First Look for Charity and the opening day events.
“We worked really long days and were doing a lot of random tasks, but I think that that in and of itself says a lot about the PR industry,” senior public relations major Emily Streeter said. “It’s not all going to be glamorous work, but it all is important and needs done.”
The Media Preview, held Feb. 6 to 7, allowed for media outlets to come see the show prior to public access in order to publicize and prepare for opening day. First Look for Charity is a black tie event, held Feb. 7, that aims to raise money for 18 Chicago area charities. This one-day event has raised more than $36 million since 1992.
The second wave of interns arrived opening day and will stay through Feb. 14. The four interns that participated in the second wave have a much more customer-focused approach dealing with social media and interaction with attendees.
“Probably the most fun and most difficult task we had was going on the show floor creating Vines and Instagram videos of show attendees,” said Duistman. “We would ask them different questions about the Chicago Auto Show and record their answers.”
Guth, Streeter and Duitsman said the experience was one they value and will definitely put to use in their future careers both from skills acquired and connections made.
“If you are willing to apply yourself and work hard, the school or your department will help you pursue your dreams,” Streeter said. “I don’t think having an internship like this on a resume could ever hurt – it’s the largest show in the country.”