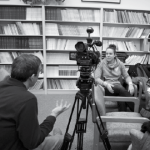 The Winter Olympics may have come to a close, but the interns have returned to open up about their experiences.

For the second time, NBC selected Bradley students to intern at the Olympic Games, with the previous interns at the 2012 London Summer Games.

Six students went to Sochi, Russia, and 12 went to Stamford, Conn., for about five weeks for the 2014 Sochi Winter Games.

Senior communication major Lee Pikelny was stationed at the International Broadcast Center (IBC) in Sochi, Russia, as a logger for the sports desk where he watched “b-roll,” secondary footage used during newscasts to help tell the story, and logged the interviews word-for-word.

“I would let the producers know what was a good shot, and then they would have records of everything that was done, so when they make their story they would have what they needed for it,” Pikelny said.

The interns were trained for their jobs and had orientation at the IBC, and for many of them, the entire experience helped them make many connections.

“I met a lot of people that have told me that they started their Olympian experience by logging at the sports desk,” Pikelny said. “I feel like there’s a whole lot of opportunity to work for more Olympics in the future; it’s incredible.”

Senior communication major with a television arts concentration Laura O’Radnik was stationed in Stamford at NBC’s Sports Group headquarters. She was a shot selector and watched live feeds of events and edited videos that went online to the website.

O’Radnik said it was helpful that she worked at Bradley with Avid, a video-editing program used for the Olympics as well.

“Overall, [the internship] gave me a better idea of what the industry is like,” she said. “You always hear about it in class, and it was not exactly what I expected. NBC’s really laid back and a great, fun atmosphere. It definitely gave me a new perspective on the industry.”

Senior communication major Nick Van Almsick was also stationed at the IBC in Sochi and logged important information for the primetime, daytime and late night segments on TV.

“What was cool was that we were loggers for the main central ingest [office] where all the stuff comes in,” Van Almsick said. “This one time they asked us to find a bunch of crashes from the past few days, so we were able to go look that up, cut those and then send it to them to be put on TV. That was probably the coolest part because like we actually felt like we were contributing.”

Van Almsick also said that Bradley prepared him with Avid, which gave him a grasp of what was going on.

“It was the experience of a lifetime,” he said. “I definitely think I’ve made some connections, hopefully for the future. It’s definitely an experience that I will never forget, and it will greatly help me down the road.”

“From all accounts they performed amazingly well and they were the ultimate ambassadors for Bradley,” he said.

Gullifor also said that he has heard from NBC that they really liked the interns’ Midwestern work ethic.

“They tend to work really hard, and employers really love that,” he said.