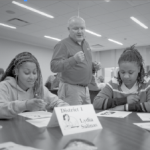 Bradley’s Institute for Principled Leadership in Public Service (IPL) reached out to the community on Wednesday to show 36 high school students just how tough politics can get.

As part of the third event of the kind, Congressional Insight invited six teams of high school students and their teachers from the Peoria area to compete in a mock-Congressional computer simulation. Each team played a newly elected Congress member, were poised with 11 rounds of political decisions and forced to face possible re-election.

“It’s a very real-life exercise that [the students] go through,” said IPL Executive Director Brad McMillan. “It’s a great opportunity for them to understand the demands that Congressmen have on them.”

The computer simulation software, which was purchased as part of a Community Foundation grant, modeled topics that real Congress members deal with. Some of these topics included whom to support for party leadership, what pieces of legislation to support, fundraising tactics and how to divide time between Washington D.C. and individual districts.

The students also had to face popularity polls from their districts and respective party leaderships before finding out if they are re-elected or not.

McMillan said the computer software is virtually unpredictable in the aspect of re-election.

In addition to the experience the high school seniors gained, McMillan said they also received tours of the school.

“I know for a fact that Bradley is very high on [many of] their consideration for next year,” he said. “It’s a good opportunity to bring them to campus and show them what we have to offer.”

The hope, according to McMillan, is that IPL will “connect those dots” between Bradley and a unique learning experience for Peoria-area students in order to encourage them to consider it in the future.

“Two of the pillars of Bradley’s strategic plan are leadership development and experiential learning,” McMillan said. “First, [we wanted to host the event] because it’s a great learning experience, but then [we can] also emphasize that [that’s] what they’ll receive if they [come] to Bradley for college.”