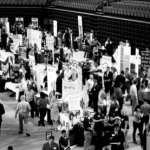 The Fall Job and Internship Fair opened doors for students and alumni on Sept. 19, and brought more employers than ever before.
Interim Executive Director of the Smith Career Center Jon Niedy said the fair was very successful.
“We’ve had more than 220 after-fair interviews so far, so that’s a great number,” he said.
Additionally, there were 1,136 students in attendance, nearly 200 more than this past spring’s job fair, and 157 registered employers.
Niedy said there are many efforts put forth to increase student attendance.
“We do a lot of promotional things like email, marketing, classroom visits and workshops,” he said. “Everything we do from the beginning of school to the actual job fair is geared towards getting students to show up for the job fair,” he said.

It’s important for students to go to the job fair, but even more important to plan ahead, Niedy said.
“We obviously want them to go, but it’s more about preparing them for the job fair.”
For students, planning for the job fair isn’t just about their resumes, but their interview skills, their ability to walk up to people and talk with them and their confidence, he said.
“What we’re trying to do is build confidence and understanding of what it means to be seeking a job or seeking an internship,” he said.

Any changes and plans for the spring job fair remain up in the air.
“For now we are just de-briefing on the job fair,” Niedy said. “I know we want to make some changes for the spring, but I’m not sure if we are going to do them yet.”
However, one goal of the Smith Career Center is certain for future job fairs.

“We always want to improve it both for the employers and the students,” he said. “That’s the important thing.”

Not only are changes being made to improve the job fair, but the Smith Career Center as well.
Niedy started as interim executive director July 15.

“I came from continuing education on campus before, and I had served there for 15 years,” he said.
Joe Batteline, a new career adviser for the Foster College of Business, started this past summer as well.
“He’s bringing some experience in a previous role as a grad assistant at a career center,” Niedy said. “The neat thing that he’s doing differently is that he’s actually having office hours in the Foster College of Business. Everyone used to come here for hours, so it will be more convenient for students.”
Niedy said he encourages all students to utilize the career center as soon as possible.