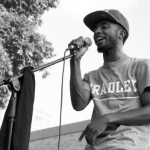 Over the summer, Bradley’s marketing department decided to add a new dimension to the university’s current social media reach.

The department, alongside senior theatre major Josiah Williams, wrote and produced “One More Night” to bring Bradley and the surrounding Peoria area to life.

“Admissions has what we call and ‘in & around’ brochure that gives information on Bradley and Peoria,” said Assistant Director of Video Production Jon Greenhoe. “We saw this brochure and we wanted to make it come alive and engage students. We’ve never had a video piece that emphasized what we do outside of campus, so we wanted to highlight that.”

Greenhoe sat down with Susan Andrews, associate vice president for marketing & publications, and made a list of key phrases, music style and iconic places in Peoria to cover in the music video. The two then began brainstorming Bradley students to take part in the project.

“We knew [senior music business major] Nate Coutteau and that he sang,” Greenhoe said, “but after presenting the music style and what we were looking for, he told us he knew someone else who was that style.”

“[Greenhoe and Andrews] sent me a list of more than 75 places that they wanted me to say and mention in the song,” Williams said. “We started narrowing it down to what we really wanted.”

Williams said he wrote the lyrics over the course of two days.

“We did very minor editing, and each time he was able to turn it around really quick,” Greenhoe said.

Once Williams wrote the lyrics, he and Greenhoe got to work shooting the footage.

“My intern [senior interactive media major John Farmer] was a huge help,” Greenhoe said. “We knew we wanted to plug these spots so John and I mapped these out. I drove the car and he filmed out the window as we passed everything.”

Andrews said the final project has been very successful so far.

“The great thing is that I think people will start humming and singing no matter how old they are,” Andrews said.

The university intends to show the music video at admissions visit days and throughout the Bradley recruitment cycle, Andrews said. With more than 25,000 combined hits between Bradley’s website and YouTube channel already, the music video has reached all ages and venues nationwide.

“We’ve already had a global reach on YouTube,” Greenhoe said. “We’re currently at 67 countries outside of the US.”

Williams, who started recording music in 2010 for leisure, said it was an incredible experience.

“I’m definitely thankful that the university believes in me and that they’re giving me a chance if they don’t,” he said.

When asked about his ultimate career goals, Williams remained humble.

“If something does happen, I will be ready for the challenge,” Williams said. “I don’t think I’m looking so much to leave a legacy. I just enjoy making music for myself and then continuing to share that music with people who enjoy it.”

To check out the music video, go to Bradley’s YouTube channel or go to jdeanwilliams.com.