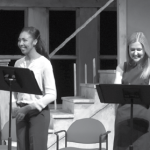 In 1896, the United States Supreme Court heard the case of Plessy v. Ferguson, the first step on the staircase climbing toward the establishment of the Civil Rights Act of 1964.

“He was seven-eighths white and yet one eighth was all it took,” said emcee Garry Moore.

Homer Plessy, a man of humble beginnings, was seven-eighths Caucasian and one-eighth African. He argued the unconstitutionality of the “separate but equal” doctrine and was eventually arrested for sitting in a whites-only railway car in 1892.

Incorporating Bradley’s year-long Civil Rights theme, on March 3 the theater and history departments and the Pre-Law Center sponsored a reenactment of this case and two other landmark cases, Gaines v. Canada [1938] and Brown v. Board of Education [1954].

Case outcomes, various statutes, judicial opinions and courtroom arguments were performed for a crowd of about 100 people in the Hartmann Center.

Gaines versus Canada was the story of an African-American male who graduated with his undergraduate degree and the intention to attend law school. His admission was denied by the University of Missouri based upon the argument that there were other law schools available in neighboring states that could better accommodate his needs, violating his 14th Amendment rights.

Brown v. Board of Education is the infamous case where a 9-0 decision by the Supreme Court of the United States declared that segregation amidst the public school system was inherently inequal, paving the way for the Civil Rights Act of 1964.

“I enjoyed how [this performance] broke down each story,” said junior theater arts major Aris Roberson. “It was so much easier to catch on and understand what really happened.”

Many of the students in the audience said they had previous knowledge of the separate cases from their history and pre-law classes, and the performance was able to connect the cases for a “big picture” perspective of the Civil Rights movement.

Sociology and theater arts major Chris Vieth agreed with Kraemer and said the experience helped him better understand the impact of the cases.

“I knew a decent amount about [Plessy v. Ferguson] and [Brown v. Board of Education], but Gaines v. Canada was really an eye opener,” Vieth said.

Moore told the audience these legal milestones were the physical representation of the persistence of a people coming together for the equality of all.

“[In Plessy v. Ferguson], the one dissenting opinion would be all it would take to haunt the conscious of America,” he said.