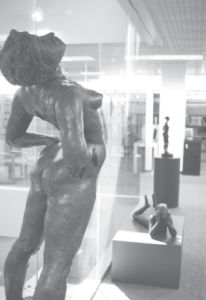 An anonymous donor donated 11 sculptures and a painting to be displayed inside and outside the library.

“This is the first time in my 15-year tenure at Bradley that we have received such an important and large gift of art,” executive director of the Cullom-Davis Library Barbara Galik said. “In my experience, art is not generally given, which makes this donation even more special.”

The works were created by three artists all who have reached some level of national and international prominence, Galik said.

The painting, by James Winn, is titled “The Thicket” and hangs on the southeast side of the first floor.

The sculptures are by artists with ties to Bradley, Nita Sunderland and Preston Jackson.

Sunderland is a retired Bradley Professor and Jackson is a Bradley artist in residence, the owner of The Raven Gallery in Peoria and a former professor of sculpture at the School of the Art Institute in Chicago.

A collection of dragon sculptures by Sunderland can be found on the second and third floors of the library, overlooking the atrium. Other works by Sunderland include a pair of sculptures titled “Knight Bound and The Prisoner” and “The Woman of Sarajevo,” on the first floor.

Outside is another one of Sunderland’s works, titled “Three Women of Ur.” The sculpture can be found behind the library near Bradley Avenue in the center of a circle of benches.

“Nita Sunderland is a former Bradley professor and her works are highly collectible,” said Galik. “Her art is displayed outside Peoria City Hall and at other public places in the community and elsewhere. Each of the pieces has come from a limited casting.”

A collection of original pieces by Jackson is also featured in the library. Three are near the second floor elevator and one is on the third floor.

“The gifts were given to the library with the intent that they be displayed in places where students can see and enjoy them,” said Galik.

In addition to art, a set of china that belonged to Lydia Moss Bradley was also given to the library by another donor.

“We were also fortunate to receive Lydia Moss Bradley’s cranberry luncheon set from a different donor,” said Galik. “Because it is so fragile, few complete sets have survived. Mrs. Bradley’s set was extremely well-maintained, carefully passed down and is in excellent condition.  We are honored and thrilled that it has found its new home at the institution she founded.”