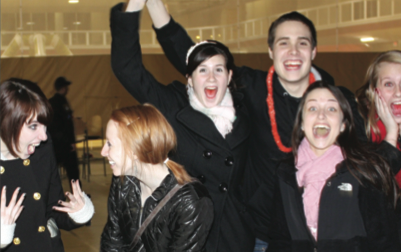 LMFAO’s DJ Redfoo and the Party Rock Crew will be bringing their unique take on danceable hip-hop Bradley’s campus April 23. More than 100 students waited until 1 a.m. at last Friday’s Late Night BU to hear the Activities Council of Bradley University announce who would be performing at the spring 2012 concert.

Many students are excited the spring concert would feature a hip-hop band.

“It should be a lot of fun because of the upbeat music,” junior business management and administration and marketing major Adam Porter said.

Junior sports communication major Montel Hardy said the concert has been in the works for about six weeks.

“Getting LMFAO was a matter of opportunity, but we really wanted them from the start,” he said.

“For Bradley to get a chance to have a really popular group such as LMFAO come to campus is difficult because it’s expensive.”

Recently Sky Blu, one of the band’s two main performers, injured his back and is now unable to perform for a few months. The other main performer, Redfoo, will continue to perform the same show with the Party Rock Crew.

“It gave us a better opportunity to get them,” Gotto said.

ACBU has decided to try something new for this semester’s concert: a general admission pit. A specific number of tickets available for the pit is still undetermined based on safety issues.

“Every year at concerts students want to be right up in front of the stage, regardless of where their seats are,” Gotto said. “This can pose safety problems because of all the chairs in the way. People who have been to these kind of concerts say, ‘it’s a great big party going on,’ which makes a pit perfect for this type of show.”

ACBU is still working out the details for the opening performance of the show and plan to announce the performer soon.

Tickets for both the general admissions pit and regular seating tickets will go on sale for students on March 26 at 8 a.m. at the arena.

Student tickets will be $10 each and every student can purchase up to 10 tickets with one ID.