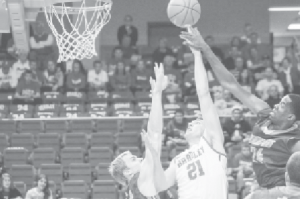 The men’s basketball team won 78-61 against Texas-Pan on Monday during the team’s second ever regular season game at the Renaissance Coliseum, but the Braves didn’t receive a home court welcome like they may have expected.

As opposed to last year’s men’s basketball campus game, which was at full capacity, a total of 3,151 tickets of the 4,200 available were sold to Monday night’s basketball game. 1,700 of those tickets sold were to students.

Students present at the game said they thought half of the student tickets sold or distributed were not redeemed.

“Last year there was a much larger crowd and more students were at the game,” said senior secondary education major Jim Ward. “I’m kind of disappointed that there isn’t a lot of student involvement. A lot of students complain that games aren’t on campus, but now they had the chance to go to a game on campus and they didn’t come.”

Junior Lauren Lorruso, a member of the cheerleading team, said she expected more students would come out for the game.

“I was kind of upset that [student turnout] wasn’t like last year, and there weren’t as many incentives for students to attend,” she said. “But the majority of the arena was still filled with students, making a fun atmosphere.”

Junior psychology major Darius Riggins said he didn’t think there were less students in attendance because of a lack of interest, rather a lack of awareness.
“Maybe the promotion for the game could have been better,” he said. “They could have done more individualized messages like personal emails and mailbox stuffers.”

Senior theatre and television arts major Peyton McDermott said he wasn’t even aware there was a basketball game until the day after.

“I didn’t even hear about the game until Tuesday when a professor asked the class if they went to the game,” he said. “I’m sure there was promotion for it but I wasn’t looking for it and I didn’t feel inclined to go.”

Even though some expected more students would be at the game, Director of Athletics Michael Cross said the on-campus game was beneficial for the team.

“The second annual men’s game in the Renaissance Coliseum was a success,” he said. “Bradley had a convincing win, and our student athletes appreciated the opportunity to play on campus with a large student turnout.”

Dyricus Simms-Edwards, a member of the men’s basketball team, agreed it was fun to play at home.

“It was nice to see our fellow classmates at the game supporting us,” he said. “We don’t get as much at the Civic Center, but I enjoyed it. It is more convenient for some students and it is a fun environment to be a part of.”

“Plans for a future game or games on campus are unknown at this time since we do not have a schedule for the 2013-14 season,” he said. “Once the schedule is complete we will examine our home games and consider both Carver Arena and the Renaissance Coliseum to make sure we are doing everything possible to position our team for success on the court.”