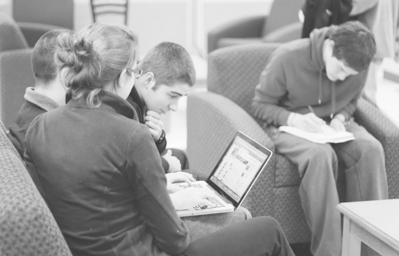 Center Court’s weekend dining hours may have contributed to an empty Lydia’s Lounge last weekend, and the lounge could close its grill entirely within the semester.

“I can’t really explain it,” said Director of Campus Dining Services Ron Gibson. “Last year we were averaging 65 people in Lydia’s Lounge, and this year we’re lucky to get 30.”

Gibson said the lounge’s dining hours have been promoted the same as last year.

“Even for the late-night dining on the weekends, we had two people the first weekend and no one last weekend,” he said. “We tried theme nights like stir fry and Mexican food, but we’re just going to keep trying different things to see what works.”

Previously, the lounge also had lunch hours, but that was not rein- stated this semester.

“Lydia’s Lounge was open for lunch because students said the lines at Williams and Geisert cafeterias were too long,” University Business Manager Ken Goldin said. “But with the lower enroll- ment, we couldn’t keep it going this year.”

Goldin said he has asked per- mission to close Lydia’s Lounge dining during the weekends.

“I’m running heat and lights and there’s people working there,” he said. “It’s too expensive to not

have any sales.” While Lydia’s Lounge is floundering, Goldin said sales at Center Court have been successful.

“The sales have just been gangbusters,” he said. “The weekend was terrific. But I think at this point we have hit saturation.”

“With [Center Court] now being open until 1 a.m. on weekdays, the new weekend hours and the hours in the other cafeterias, I think students are happy overall,” he said. “We have adjusted every year on student requests, and we stick with it if it works.”

Even if Lydia’s Lounge closes its dining facility, Goldin said the space could still have food for events.

“I’ve given up the cafeteria to Student Services,” Goldin said. “But if we close and there’s an activity in there, we will cater food.”

Though Lydia’s Lounge may be cutting off sales, the top-selling food item will be continued at Center Court.

“We found out the mozzarella sticks were a huge seller at Lydia’s, so we started carrying them at Center Court,” Gibson said.

Some students said Lydia’s Lounge was not high on their dining list.

“I’ve only eaten there twice, and both times were at night,” said freshman pre-education and health science major Arnesha Neal. “I never know when the lunch hours are.”

“I ate there at night once,” he said. “But since Center Court opened [on weekends], I probably won’t eat there very much.”

“I usually grab lunch on the go, so I didn’t have to time to eat at Lydia’s Lounge during the day,” she said. “But now that Center Court is open on the weekends, I’ll be there a lot. I like that I can stop in and grab milk and cereal whenever I run out.

Take our poll: Since Center Court is open for business on the weekends, where will your eatery of choice be?