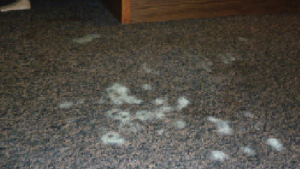 Two years after mold was found in various University Hall dorm rooms, more has been found growing from the carpet of a Lovelace Hall dorm.

When freshman biology major Jasmine Renzulli moved into her Lovelace singles dorm this year, she said she cleaned the carpet several times to get rid of the scent of mold.

“My friends would ask if I had just done laundry because the clothes in my closet would feel damp,” she said. “But it’s always just kind of moist in my room.”

Then, in an empty room a few doors down from her, Renzulli spotted mold sprouting out of the carpet.

“The RA and I were talking and then she was checking the empty rooms. She opened the door to one of them, and that’s when I saw the mold,” she said. “When they cleaned it, it was an all-day thing. They had this huge machine and were in there for most of the day.”

Renzulli said she tries to keep her door open at times to let some of the moisture out of her room.

“Singles are more expensive than double rooms, so it’s kind of annoying to have to deal with,” she said.

Executive Director for Residential Living Nathan Thomas said the heating and cooling unit in the empty room had gone bad, and that triggered the mold growth.

“The room was unoccupied, so no one knew about it,” he said. “The buildings are meant to be occupied to work best with the cooling system, so doors opening and closing and people coming and going throughout the day helps the circulation.”

After discovering the mold, Thomas said several steps were taken to check the rest of the building.

“We searched every open room when we saw that,” he said. “We had [a contractor] come in and do an industrial cleaning. After we checked the open rooms, the [resident advisor] and hall director talked to residents to see if they had problems with their rooms. We also took air samples in that room and in other areas to check for mold spores.”

Thomas said at this time, there are no plans to move residents from Lovelace Hall to Elmwood Hall, another singles dorm that has been closed due to renovations and lack of demand. He said Elmwood will hopefully be open again next fall.

Thomas Menold, of Menold Construction and Restoration in Peoria, said small amounts of mold are everywhere, but larger concentrations can be hazardous.

“If it’s just a little bit, it can be cleaned with soap and water,” he said. “When mold grows in great concentrations, it should not just be cleaned. It has to be contained to keep it from spreading, and the workers are required to wear personal protection equipment.”

Menold said mold is most potent when it is in the air.

“If the mold spores become airborne and we breathe them, that’s when we tend to react to them,” he said. “But again, a little bit of it can be cleaned simply and easily. A lot of it is a different story.”

Menold said mold can be toxic to some people.

“Most of us aren’t too allergic to it,” he said. “But for some who are, it can be dangerous to their health.”

The mold in University Hall was cleared up with a change of furniture, Thomas said, but every situation is different.

“It’s handled on a case-by-case basis,” he said. “There is still work to be done in the residence halls, but we are committed to taking care of them.”

This isn’t the first time Lovelace has struggled with mold and maintenance. In 2011, Ivan Gonzalez-Gimenez and Ryan Miller, who were a junior and sophomore at the time, respectively, brought concerns about the building to Student Senate. They reported cracks and holes in the floors, sinking ceilings, degraded furniture and even mold.