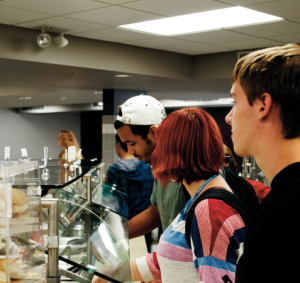 The two-and-a-half month swap made changes to every dining facility and food mart at Bradley, and General Manager Matt Wilton said there’s still room for assessments.

“We’re out of the gate, we’ve got a start, but now we need to build and refine,” he said.

For the most part, students said they were pleased with the Student Center’s food offerings, including the convenience store P.O.D., Chick-fil-A, Topio’s pizzeria, Greens To Go salads and Moe’s Southwest Grill, which is set to open in mid-September.

“The changes they made [in the Student Center] are great, I actually hung out there last night,” he said. “A lot of times I leave the library late, so it’ll be nice to have somewhere to stop and get food.”

Junior accounting major Andrew Senger said he is undecided on the changes to the campus overall, but that the Student Center transformation was well done.

“The food’s good, especially Chick-fil-A. And it’s more expensive, but we expect that,” he said. “P.O.D.’s looks really nice, that’s a change I do like.”

The Student Center has received positive feedback, but some students said they are not satisfied with the quality of the Williams Hall and Geisert Hall cafeterias.

“There are too many hot dogs and burgers in the cafeterias,” she said. “I feel like when I came to visit Bradley, the food was better than it is now.”

“There are less choices, less vegetarian options, they’re not as healthy and they don’t label all the food, so sometimes you don’t even know what you’re eating,” she said. “Last year I was so impressed with the changes to Geisert. Before this change, the line for dinner there was out the door. There’s barely anyone eating there now.”

In addition to quality, Rains said some of the the increased costs are not effective.

“The Student Center is awesome, but the choices are more expensive,” she said. “We have higher prices to pay in the cafeterias, but with the same amount of meal plan money as before. It doesn’t make sense.”

At the end of last year, the choice for food provider was between three entities: Eurest, the former food provider, Sedexo and Aramark Higher Education. Bradley ultimately chose Aramark in part because of its commitment to installing the Student Center food court, Vice President for Business Affairs Gary Anna said. Aramark fronted a large portion of the roughly $3.5 million campus-wide renovations, he said.

But they avoided changing the nuts and bolts of the meal plan in order to keep the shift simple for students, Vice President for Business Affairs Gary Anna said.

“There is a slight increase in price overall,” he said. “But in feedback across the board, we didn’t want to change all components of the meal plan. The basic commitment was we wouldn’t totally turn the campus meal plan upside down.”

Another major change many students noted is the later hours for several food vendors. But that rule is open to adjustments, Anna said.

“The 3 a.m. hours are quite different,” he said. “We will have to assess that routinely, but we did that because students requested a greater variety of hours.”

One aspect that has carried over from the university’s Eurest contract is the employees; Aramark opted to keep many former food staff members.

“All firms were committed to evaluating the people already employed here,” Anna said. “You will see a lot of familiar faces on the team.”