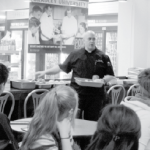 Prepare yourselves, food enthusiasts, a new campus club is serving up some hospitality and chef competitions for Bradley students to enjoy.

The new club Fresh Slice hopes to increase awareness about the recently added hospitality leadership program that was introduced to campus.

“The name Fresh Slice was created in two parts: the first part, ‘fresh,’ meaning new and exciting to Bradley’s campus, and ‘Slice,’ because of a slice of pineapple, which is the international symbol of hospitality,” Henshaw said.

According to Henshaw, Fresh Slice also plans to host multiple hospitality-related events on campus, and they want to encourage students to consider majoring in hospitality leadership.

“The club helps students find their passion, creativeness and guides them in becoming professional leaders in food service management, lodging management and event planning,” she said.

Robinson said those who major in hospitality leadership can do more than just hotel work, by branching out in any hospitality organization.

Fresh Slice also offers some unique out-of-the-classroom learning opportunities, which is one of the reasons why sophomore hospitality leadership major Abby Craft said she joined.

“I joined Fresh Slice to learn more about what the hospitality industry has to offer, and I wanted to be exposed to different aspects of the industry outside of the classroom setting,” she said.  “So far Fresh Slice has been the perfect way of doing that.”

Sophomore hospitality leadership major Hannah Koci said she became involved with the club when she was thinking about switching her major.

“I decided to take on a leadership role to work with others in the [hospitality leadership] major to learn all I could,” she said. “I declared myself as a hospitality major early last semester, and I have been continuing to learn ever since.”

After spring break Fresh Slice will host an event called Brave Chef, which will imitate Iron Chef America. Teams of six will face off in a cooking competition, where they will have to include a secret ingredient in all dishes made.

The competition is open to all audiences and will be held at 6 p.m. April 5 in the Student Center Ballroom.

Fresh Slice is open to everyone with an interest in restaurants, event planning and hotels, not just hospitality leadership majors, Henshaw said. The club meets on Wednesday nights at 7 p.m. in Bradley Hall room 32.