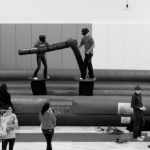 Of the many changes to this year’s Homecoming festivities, Friday’s Late Night BU (LNBU) was seen in a new light when it was held in the Renaissance Coliseum following the Red-White Scrimmage.

“We used the Renaissance Coliseum to make the Friday night of Homecoming one big night,” said LNBU Event Coordinator Michael Miller. “This encouraged more people who go to LNBU to go to the Red-White Scrimmage, and more basketball fans to stay for LNBU.”

Students received free smoothies, massages, balloon animals and explored the Renaissance Coliseum after the game.
Miller estimated that between 750 and 1000 people attended the event Oct. 18. He said this was slightly lower than Markin’s usual LNBU events, but the drop was expected.

Volunteer Coordinator and sophomore Hayley Feichter said she agreed with Miller’s ideas to change the location for Homecoming.

“I think the Renaissance Coliseum is a good change of scenery for LNBU,” Feichter said. “This kind of change can bring about different possibilities, but we were excited to try something new. I think it went over really well.”

Miller said the Coliseum won’t host LNBU other times during the year, but the location has its own allure.

“Students enjoyed having access to areas that have been restricted throughout their college careers as much as anything,” Miller said. “I think it’s like the Winter Classic in the NHL. If LNBU was at the Renaissance Coliseum more than once a year, it will lose its luster.”

Junior sports communication major Bintu Njie said she personally enjoyed LNBU, but the student response was not as favorable.

“I see where [LNBU planners] were going with it, but I feel like there’s something about Bradley people and change,” Njie said. “Instead of coming to the Renaissance Coliseum, they just didn’t come at all.”

Miller said, despite the drop in attendance, he looks forward to making this a tradition.

“This will be a nice tradition for LNBU if we are lucky enough to have it continue in upcoming years,” Miller said.