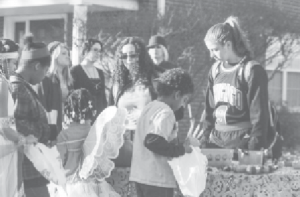 Bradley’s Panhellenic community doesn’t have plans to expand any time soon. The Bradley Panhellenic Council, or Panhel, recently made the decision to alter the required member total for sororities. They also decided to push back further conversations about bringing a new sorority to campus.

Due to the trend that some chapters have been unable to meet total and others are struggling to accommodate large chapter sizes, Panhel lowered the total member requirement from 105 members to 95 members.

“We review total every year immediately following recruitment,” he said. “We ask our chapters where they would like to see total based on the current membership statistics of our chapters.”

By decreasing total Panhel hopes to benefit chapters on both ends of the spectrum, said Panhellenic Council President Anna Treesara.

“We came to the consensus that if we lowered total, we would essentially be benefitting everyone,” she said. “The chapters who have not been struggling do not have to worry about housing situations, and they can help chapters who are struggling to meet total.”

Coinciding with the adjustment of total, Panhel made the decision not to further conversations about expanding campus. Koch said expanding Bradley’s Panhellenic community can be revaluated in 2013.

“We’ll review total again after formal recruitment in 2013,” he said. “So no decisions on expansion would happen until this meeting at the absolute earliest. Even if they were to decide to expand at that time, a new Panhellenic organization would not come to campus until fall 2014, and that’s only if [Panhel] chooses to expand.”

Koch said in order to justify expanding the community, many things would have to happen. First, there would need to be a drastic increase in women going through formal recruitment and accepting bids. However, this is limited because of the amount of students admitted to campus. If enrollment numbers increase, there may be a need to consider extension.

Extending would provide many opportunities for the greek community, said Koch.

“When a new organization comes on to campus, they do a remarkable job of recruiting some of the best leaders, scholars and servants on campus, regardless of their class standing,” he said. “A new chapter breathes new life, energy and passion into the Panhellenic community.”

Associate Director of Recruitment Kylie Nadeau said extension could give the greek community an edge during recruitment.

“We are always striving to get others to join our community, and with another chapter on campus it will give girls another option to be in a sorority, and it will allow our community to expand,” she said.