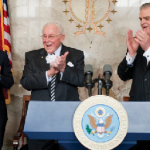 The event was co-sponsored by Schock’s office and Bradley’s Sigma Nu fraternity. Michel is a member of the Bradley chapter.

“He was a Sigma Nu himself so we wanted to support him,” said sophomore management and administration major and Sigma Nu President Drew Blumenshine. “We heard that the turnout was great, and the event went really well.

More than 200 members of the Peoria community packed the Federal Courthouse atrium to greet Michel and hear the three politicians speak.

“We’re here to celebrate one of the great men of Central Illinois,” Schock said.

Michel, a native of Peoria, discussed his World War II service before attending Bradley and living in the city once again.

“I remember when I bought stamps here [in the Federal Building before I was in Congress],” he said. “I never would have thought it’d later be a reception place for old Bob.”

Michel served in Congress for 38 years. During that time, his legacy was his bipartisanship. He said living in Peoria helped him have a good relationship “across the aisle” in Congress.

“[Peoria] has … wonderful people who will do the right thing when they are called to do it,” he said. “That’s the ultimate – working together to get things done for the people.”

“Bob’s service remains a sterling model for all of us who serve after him,” he said. “He always has the ability to speak from the heart.”

Following the Congressmen’s speeches, the Bradley Chamber singers performed several songs. Michel shed a few tears and sang along as the choir performed Bradley’s fight song. He then led the audience in singing God Bless America.

“I know we’re all proud of the fact that we’re Peorians,” LaHood said. “It’s a proud moment for Peorians to honor Bob Michel.”

“It’s very significant,” he said. “It established the bond and tradition for young students to look up to these kinds of things. If you’re a Bradley student interested in politics, you can look at [Michel, LaHood and Schock] and say ‘I can do it too.’”

LaHood mirrored this point in his speech.

“I know Bob is really touched by all of this,” he said. “For young people, this goes to show what Central Illinois is all about. We’re here to honor someone who serves us.”