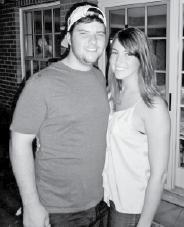 In the words of his Phi Kappa Tau brothers Mike Tednes and Mike Zeniecki, John Battistoni was “the biggest goofball, and the nicest guy.”

But after Battistoni’s death on Dec. 2, the fraternity and entire campus community suffered a devastating blow in his loss. He was a senior construction major in the Department of Civil Engineering and Construction.

Zeniecki, former Phi Tau President and a senior, said there is one night in particular that reflects the friendship he had with Battistoni.

“I remember one late night when I was sitting by myself and [he] came up and invited me and a couple other guys to hang out at his house,” he said. “He made some deep-fry batter and we just raided the fridge frying whatever food we found. We did that until 4 a.m., and it was such a great night.”

“He always wore a crew neck sweater when he’d play,” Tednes said. “It didn’t matter what the weather was. When we’d play football he’d take the ball and hide it under his sweater.”

Zeniecki added that on the day of a formal, no one was more excited than Battistoni.

“He was always the first one to wake up on the day of a formal,” he said. “It would be 6 a.m. and he would find a way to wake everyone up because he was so excited. If he wanted to hang out with you, he’d find a way.”

In December the fraternity planned a candlelight vigil in Battistoni’s honor, where hundreds of students joined together to remember “JB.”

“The turnout was so much more than I expected,” Tednes said. “It was a more than perfect way to remember him.”

For Zeniecki, the number of students in attendance for the vigil was overwhelming.

“The amount of people who showed up, both greek and non-greek, was just incredible,” he said.

In the weeks since they lost their fraternity brother, Tednes and Zeniecki said the house members are relying on each other to move forward.

“That whole situation really took its toll on the house,” said Tednes. “But it did bring us closer together.”

Zeniecki said being strong for the others in the house has helped him handle the sudden loss of his friend.

“It was devastating,” he said. “I don’t know how I could have done this without the support of the fraternity.”

Tednes and Zeniecki said the school administration was also a major source of support, whether helping to coordinate supplies for the vigil or just checking in to see how the fraternity was doing.

“We want to thank everyone for everything they did,” Tednes said. “It was such a huge help. The administration still checks up on us now, especially [Interim Vice President for Student Affairs] Nathan Thomas, President [Joanne] Glasser and [Director of Orientation and Advisement] Dave Trillizio. [Trillizio] used to be our advisor, and he’s been there through thick and thin.”

In remembering Battistoni, Zeniecki said he was social and funny, but at heart, he was a genuine friend.

“He was the biggest goofball you’d ever meet, but if it came right down to it, he’d be the first to give you the shirt off his back,” he said.