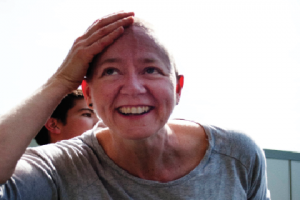 The latest buzz around campus is about Danielle Glassmeyer, an English professor who shaved her head yesterday for the St. Baldrick’s Foundation event on campus.

The event, mainly organized by Pi Kappa Alpha Fraternity, started in 2000 when three reinsurance executives turned their St. Patrick’s Day party into a head shaving benefit to raise money for children with cancer. Bradley’s St. Baldrick’s organization had a goal to raise $25,000, and 40 participants are were willing to let go of their locks.

“I heard about this 15 years ago through family who participated out east,” Glassmeyer said. “A few years ago, I heard about it [on Bradley’s campus]. I wanted it to be a challenge that would generate serious contributions.”

Glassmeyer, who has donated her hair to Locks of Love in the past, had her head shaved by one of her English students yesterday in Olin Quad. Glassmeyer set a goal to raise $5000, and is still hoping for online donations even though the event is over.

“I’d rather set [my goal] high then low,” she said. “I figured out that we have about 500 faculty members. If everyone put in $10, there would be a chance [of reaching the goal]. It’s not breaking anyone’s bank.”

Glassmeyer said she was inspired to go bald mostly by her niece, Brenna.

“I have a 17-year-old niece who had childhood leukemia,” she said. “Now she’s 12 years post-chemotherapy. I wanted to try to say something about how happy I am that she’s with us.”

The Body Project, a Bradley organization promoting healthy body image, was also an inspiration for Glassmeyer.

“I wanted to start discussions on why we have a particular expectation about how particular bodies should look,” she said. “[Women who have illnesses and are bald] have this layer of shame. I want to contribute to the discussion of why we have that shame and embarrassment over hair. I’m anticipating strange looks at the grocery store. But this is a gesture towards women and children who don’t have the choice [to be bald].”

Glassmeyer said she hopes she can reach her goal of $5000 through online donations after the event, but said the action of shaving her head has a bigger impact than money. She has nearly $1900 as of Wednesday.

“It’s okay if I don’t get to my goal [on Thursday],” she said. “I just want to spread the word for professors or other females to do it in the future.”

Rachel Tuma, a family friend of Glassmeyer’s, is a registered nurse at OSF St. Francis who is also participating in the event after hearing about it from Glassmeyer.

“[Tuma] will reach out far beyond Bradley,” she said. “It’s an exciting and hopeful thing, that it will get out to the community to folks who are nearby but don’t know about it.”

Despite St. Baldrick’s tagline of its participants being heroes, Glassmeyer said the title wasn’t her motivation.

“I’m not stepping up to be a hero,” she said. “I’m making a gesture that has the potential to make a ripple effect.”

People can still contribute to Glassmeyer, individuals or teams at www.stbaldricks.org.