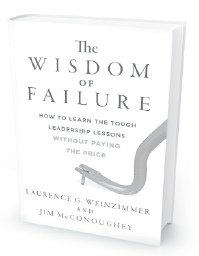 Despite having the word “failure” in his latest book’s title, Bradley professor Larry Weinzimmer’s work is anything but that – it has topped best-selling charts with its release, including the Wall Street Journal.

Weinzimmer, a professor of management in the Foster College of Business, co-authored “The Wisdom of Failure: How to Learn the Tough Leadership Lessons Without Paying the Price” with Jim McConoughey. The book debuted at number three on the Wall Street Journal’s best-seller list in the hardcover fiction category, for the week of Oct. 14.

“I found out the day before [it would be on the list] from my publisher, but I didn’t know where on the list,” Weinzimmer said. “I was overwhelmed when I found out it was number three.”

The book also made an impressive rank on Barnes and Nobles’ top 100 list, which includes all books, not a specific business category like the Wall Street Journal.

“I didn’t think the book would make Barnes and Nobles’ list, since it competes with all books like Percy Jackson [and other fictional novels],” Weinzimmer said. “But it made number one on that list. It was a shock, since business books don’t usually compete with novels. I took a picture [of that list] and have it as my phone’s background.”

The book, which studies failures among businesses, why they happened and how to prevent the same mistakes, started with research seven years ago, Weinzimmer said. The book writing process began in April of 2011.

“[Co-author McConoughey and I] took a look at the best-selling leadership books on the market and saw that a lot of them explained how to be a good leader,” he said. “But we didn’t find any books about what you shouldn’t do.”

Weinzimmer and McConoughey studied failure to discover “whether organizations that were accepting of mistakes had stronger or weaker financial performance,” Weinzimmer said. They interviewed nearly 1,000 managers and leaders across 21 industries.

“We found that there was a positive relationship between cultures where mistakes were accepted in both individual and firm-level performance,” he said.

The co-authors then mapped out errors leaders should avoid that could end careers and destroy companies. They also included lessons the leaders learned from failures in their final stages of the study process.

“I’m taking findings from both the book and the research to incorporate in classes,” Weinzimmer said, who teaches mostly at the MBA and master’s level at Bradley. “I like to bring in stories [from a study] versus a lecture, because I feel like students can relate more to them.”

Even though it’s only been a few weeks since the book’s release, Weinzimmer said it’s been a whirlwind so far.

“I haven’t had a chance to catch my breath yet,” he said. “I had about 15 interviews last week and have a lot going on with both regional and nationally syndicated shows, like FOX Business, CNBC and Investor’s Business Daily.”

Weinzimmer said he will take a chance to soak in his book’s success once things quiet down.

“Hopefully there will be a celebration soon, once the dust settles,” he said.