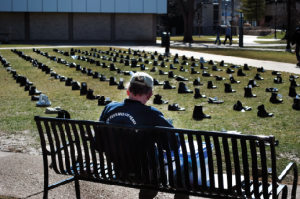 More than 240 pairs of civilian shoes and boots have been laid out on the Olin Quad since Wednesday to represent fallen United States Military personnel from Illinois or Iraqi civilian casualties.

The exhibit, called “Eyes Wide Open,” is one of several events hosted by the Peoria area and co-sponsored by groups such as American Friends Service Committee, the Peoria Area Peace Network, the Bradley Action Committee, Iraq Veterans Against War and Occupy Peoria. The purpose of the events is to educate students and the Peoria community members about the long-term effects of war.

“[The events are] a joint effort between Bradley and community groups to raise awareness that while troops have been pulled out of Iraq, the damages of our long-term attacks on Iraq and other countries continues,” Peoria Area Peace Network member Nancy Long said. “[The military boots] represent soldiers who died after returning home due to the effects of depleted uranium from our tank-buster bullets. Others chose suicide for relief from their memories and their post-traumatic stress disorder. The civilian shoes are a representation of all the men, women and children who died because they were in the wrong place and time.”

Junior social work and sociology major Andrew Englebrecht, who helped coordinate the events as a member of Occupy Peoria, said he hopes the events give students a chance to reflect on the current and recent wars.

“I believe in peace, and I’m not saying it has to be anybody’s answers for themselves,” he said. “I think particularly on a campus setting that it is easy to get distracted, or caught up in day-to-day life, and maybe there are some other things out there that we as humans beings need to talk about or at least think about.”

Englebrecht said exhibits such as this open up a forum for important discussions.

“I’d like to see a world where we can openly talk about these issues,” he said. “[The events are] meant to be a memorial of those that lost their lives for the war.”

Lori Paton, member of the Clear Creek Friends Meeting, said while organizing the events several people impacted by the war have contacted them.

“We have received contact from a disabled veteran who is having challenges re-adjusting to daily life, including finding a job he can perform now that he is disabled,” she said. “We have also been contacted by a mother who lost her son, Aaron Barnes, to cancer brought on by his exposure to depleted uranium. There will be a pair of white boots added to the exhibit to represent Aaron and all the other service personnel whose deaths are related to [depleted uranium] exposure.”

Paton said the exhibit is unique because it recognizes the suicide deaths of veterans.

“Sojourners magazine reports there are nearly 1000 suicide attempts by veterans per month,” she said. “I hope everyone takes a few minutes to visit the exhibit and reflect on the cost of this war. I also hope it sparks a determination in our community to reach out to those who are trying to pick up the pieces now that the war is over.”

The Eyes Wide Open exhibit will be open on the Olin Quad from 9 a.m. to 9 p.m., weather permitting, until Sunday at 5 p.m.

Tomorrow the movie “Soldiers of Conscience” will be shown in Neumiller Hall from 2-4 p.m. with commentary from author Camilo Mejia.

“Mejia was a member of the Florida National Guard and was deployed to Iraq for combat,” Paton said. “[He] has authored a book about his experience and has appeared on ‘60 Minutes.’ After witnessing the war crimes against Iraqi detainees, he became a conscientious objector to war and was court-martialed. Camilo can tell his story in full at his appearance Saturday, so I don’t want to give too much away.”