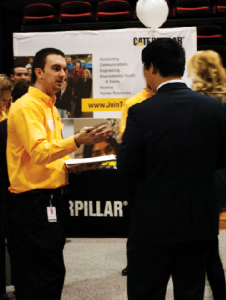 This placement rate, as shown in Bradley University’s First Destination Report, is four percent higher than the 2011 graduating class, the highest the university has seen in five years.

Executive Director of the Smith Career Center Jane Linnenburger said hiring conditions have improved across the country and are reflected in this increase.

“Across the country we hear in the job outlook reports in the trends and hiring that conditions for college graduates had improved quite a bit,” she said.

The report also provides placement rates within specific colleges, such as how many graduates had participated in career-related experience and the regions in which graduates were most likely to accept jobs in.

Four of the five colleges within Bradley saw a two to four percent increase in placement rates over the past year, and the Slane College of Communications and Fine Arts alone increased seven percent.

Of the 1,065 graduates in 2012, 86 percent had at least one internship. Linnenburger said she believes this contributed directly to the high placement rates of Bradley graduates.

The University First Destination Report is compiled from placement surveys distributed to recent graduates. Linnenburger said 90 percent of all 2011 and 2012 graduates participated in the surveys.

When figuring the final numbers for a group, the Smith Career Center considers those who are employed, those who are continuing their education and those who are doing other activities, such as taking a year off to travel or volunteer, said Linnenburger.

Of the students who received jobs in 2012, several chose similar companies. Many of the top employers from the 2011-2012 study were present at Bradley for the Spring Job and Internship Fair on Wednesday. Among the employers are companies such as Caterpillar, Inc., State Farm Auto Insurance and Target Corporation.

“We look for a lot of leadership experience,” she said. “We love coming to Bradley because there’s a lot of opportunities with certain organizations and classes where students develop a lot of communication [skills] and really become leaders.”