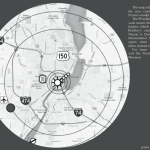 Bradley’s “Great Red Spot”-ed planet is gone, thanks to the Curator of the Solar System.

Curator Sheldon Schafer, Astronomy professor and director of education for the Riverfront Museum, shifted Peoria’s model universe with the relocation of the Sun.

The Sun painted on the entrance to the Lakeview Museum of Arts and Sciences will remain in place, but a new sun is located in the lobby of the Peoria Riverfront Museum.

The old model had a scale of 125 million miles to one and set the record for “largest scale solar system in the world” in the 1992 Guinness Book of Records.

The new 99 million to one mile scale replica of the solar system spans out from Peoria and reaches Pekin, Galesburg and Bloomington.  With this year’s modifications, it will now include five dwarf planets, the moon and the nearest star.

Jupiter hung in the south stairwell of Olin Hall until the building was remodeled in 2002, during which it was transferred to the library. After Olin was completed, the planet was returned where it hung from the second floor ceiling in the glass-encased northern stairwell.

According to Schafer, the placement there was no accident.

“The chemistry floor has higher ceilings because of all of the [chemical pipes],” Schafer said. “We wanted to keep the planet out of the casual [student’s] reach, just in case.”

The new Jupiter, which will hang from the rafters at the Wayne A. Downing Peoria International Airport, had to be redesigned with engineering in mind because of its size and location in a public place.

The old Saturn will be scrapped. Its rings, however, will be used for the new Saturn, even though the scale is off.

“The old Saturn’s rings are 20 percent too small [according to the scale],” Schafer said. “[But] they are made of the largest sheet of Plexiglas available [at 90 inches].”

The system’s installation is still taking place, as Bradley’s Jupiter was removed from orbit in August. Neptune and Uranus were also placed in their new locations in the last month.

As for the new Jupiter at the Peoria International airport, Schafer said everything is set for the Oct. 8 installation.

For now, Bradley will not have a new planet. But looking into the next frontier of Peoria’s solar system model, Schafer said he would enjoy including Bradley again.

“I would bring [another planet here] in a heartbeat if I could make it work,” he said.