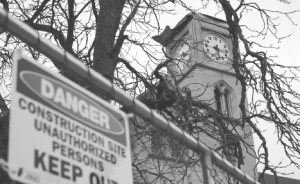 Evidence of the Campaign for a Bradley Renaissance is apparent everywhere on campus.

The campaign was the most lucrative Bradley has ever seen, raising more than $11 million more than the original target of $150 million.

“The Renaissance Campaign began to raise funds to reinvest in Bradley facilities, provide additional resources for academic programming and scholarship, bolster the university’s endowment and energize our alumni and friends across the country,” said Vice President for Advancement Pat Vickerman. “Each of these goals were met.”

Construction for the Campaign has been evident in the past three years, including the Markin Center, the arena, the Main Street parking deck, the renovation and expansion of Westlake Hall and the construction of the Hayden-Clark Alumni Center.

“The facility problem at Bradley showed that [our facilities] were outdated or not in existence at all,” said Chairman of the Campaign for a Bradley Renaissance Gerald Shaheen. “Bradley was becoming less and less competitive for the type of families that we wanted to attract.”

The alumni center is the most recent of the Renaissance Campaign facilities to be completed, opening its doors during this year’s Homecoming festivities. The alumni center’s Hall of Pride is named after Shaheen and his wife, Pam.

“We have a lot of pride in Bradley and the alums she has turned out,” said Shaheen. “We feel very honored, and I think it’s a testimony to all Bradley alums of a fine education that Bradley can provide.”

The uniqueness of the alumni center coupled with the Campaign for a Bradley Renaissance may also make Bradley more recognized nationally, said Vickerman.

“The campaign has created a tremendous amount of enthusiasm and will help position Bradley as a university of national distinction,” he said.

Vickerman said all of this money will benefit the university as a whole.

“The Renaissance Campaign has been transformational for everyone on our campus,” he said. “The Bradley education will be more accessible to current and future students.”

As the construction on campus begins to wrap up and students, faculty and staff enjoy the new facilities, the Campaign’s original goals will continue to be researched throughout the next few generations.

“I am absolutely elated, in awe of the new type of buildings, how quick we did it and how beautiful they are,” Shaheen said. “This board set a new standard [for university facilities].”

Vickerman said the funds raised by the Campaign will greatly affect Bradley’s future.

“Our new buildings are the most visible sign of the Campaign for a Bradley Renaissance,” said Vickerman. “But this Campaign has been about people and the impact the funds raised will have on Bradley’s future.”