Hungry Braves may have trouble adjusting to the new meal plan system, which now barters with meals instead of money. 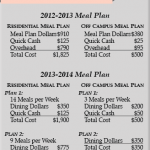 The meal plan has a new system in which the meals are on a per week basis.

Students living on campus can choose from a plan of either nine or 14 meals per week, with the meals automatically loading into the account on Sunday morning.
The unused meals for each week are not transferred or refunded.
Furthermore, at the end of the semester, leftover money will roll over into the Quick Cash as done in previous years, however, the maximum amount of rolled over cash is $100.

“As part of these changes and investments, we committed to maintain the financial structure and features of the student dining plan until further assessments could occur,” Vice President for Business Affairs Gary Anna said.

Anna said that a year ago the university made fairly significant changes to the dining operations including additions of new brands in the Michel Student Center and renovations to facilities in the Student Center, Williams Hall, University Hall and Stacks Cafe.

In addition, a variety of other changes to operating hours and meal options were affected.
The assessments for the new system were completed late last semester and included student feedback, which influenced the changes that had taken place, said Anna.
“These assessments confirmed that our meal plan cost [$1900 per semester] is among the least expensive of any university offering similar dining options,” Anna said. “Our hours of access per student are very generous.”

According to Anna, assessments also concluded that the structure of the plan was unique. Students and parents assessing college options found the plan confusing and the concept of the rollover of unused meal money to Quick Cash was unmatched to other universities.
“In fact, we found only one other institution that offered any rollover of funds,” he said. “As a result, and considering select student feedback, the changes that have now been affected were structured.”

As far as cost benefits for the students, Anna said the changes allow Bradley Dining Services to sustain the quality, choice and multiple venues that students have suggested, but some students have their doubts.
“I personally dislike [the changes] due to the few options that are available. I have nine meals and have only used two since I have been here,” said junior social work major Jirmiah Leverette.

Leverette said that she likes that the cafeterias are open until 8 p.m., but feels forced to eat and use meals each week.

“Before, I could eat as I pleased and not have to worry about having enough meals, what day of the week it was and still having seven meals left on a Saturday night,” she said.

Leverette said she thinks students should have more than two options for customizing their meal plan, as everyone has different eating habits.
The change in prices appears to be a concern to some students as well.
“Lunch is an outrageous $6.50 if you don’t use the ‘weekly meals’,” said sophomore interactive media major Ian Karlovsky. “I’m now in a position where I’m stuck eating at the cafeterias for an entire semester, or I’ll run out of money.”