Rolling to a change: Student pursues to bring nicer toilet paper to campus 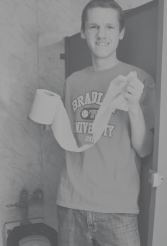 Sometimes a little discomfort causes a push to make a change.

Motivated by his own dissatisfaction and complaints from other students, junior Ethan Zentz, a Student Senate chairperson, has been working with Director of Custodial Services Pat Dempsey to explore higher quality options for residence hall toilet paper.

‘’[Dempsey] realizes that the residence halls are not like home, and [she] has been really supportive of everything,” he said. “It’s cool to see that she is so willing to work with students and help them meet their needs.”

Zentz and Dempsey have been meeting over the past semester and Zentz said he thinks a change in toilet paper in residence halls would be a change for the better.

Zentz’ senate constituents aren’t the only students with complaints. Since his first year in the residential halls, Zentz has chosen to purchase his own toilet paper.

“I buy my own toilet paper and that stuff is like cotton,” he said. “It’s frustrating that I have to spend my own money, but I like the comforts of home.”

Dempsey said they are currently exploring different toilet paper samples in order to pinpoint the direction they want to take.

“We operate on a fiscal year,” she said. “So we’re locked in for the entire school year and we have already purchased the year’s supply of toilet paper. Now we have the time to look into new options.”

It has been 25 years or more since the toilet paper available on campus and in dorms has been revaluated and changed, said Dempsey.

“If we move with a totally different product than what we already have we would have to change the dispensers as well,” she said. “After graduation there is a window of time where the old dispensers would be removed and the new ones would be put in place before conferences and orientation begins.”

Once they agree on a sample, they will look at pricing she said.

“The goal is to have a paper in place this summer,” she said. “There’s a very good [chance that it will be,] unless the price is so bad. I hope it works out.”

Dempsey said the quality of the toilet paper in residence halls now isn’t as bad as some students think.

“The paper we have now is actually at the middle of the road in comparison to other products,” she said.

The university used 49,000 rolls of toilet paper last year Dempsey said, which is a typical amount for the number of activities on campus and students there are in the dorms.

“[Dempsey] knows so much about custodial stuff,” Zentz said. “She can’t promise how good [the toilet paper] will be, but I promise it will get better.”