Romney stops at Bradley on eve of primary victory 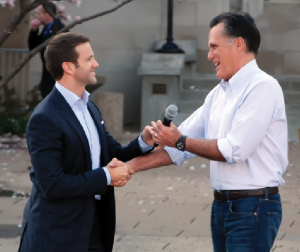 Just one day before winning the Illinois primary, former Massachusetts governor and presidential candidate Mitt Romney addressed the crowd of about 1,000 people gathered in front of Bradley Hall.

The unseasonably warm afternoon proved favorable for the students, faculty, community members and national media congregated in Founder’s Circle to listen to the candidate, who arrived dressed in jeans and a button-down shirt.

Just a couple hours later, competitor Rick Santorum made an appearance at Davis Brothers Pizza in East Peoria. Both candidates’ appearances helped aim the campaign spotlight on Central Illinois, at least for a night.

“This election, I really believe, is all about what kind of CEO we want to hire to run this largest company, this largest organization, which is the greatest country on earth,” Schock said.

After Schock’s brief introduction, Romney greeted the crowd, saying he never expected to run for president.

“My experience is your life will move in ways you never thought it would,” Romney said. “I thought I’d be an automobile guy. Now I’m running for president of the United States. What a thrill it is.”

During his speech, Romney spoke frequently about the economy, and his plan to recharge the job market.

“Every innovation of America, every accomplishment of our economy, started with a dream. And dreams are fragile things,” he said. “When the government steps in with a heavy hand of regulation…it extinguishes dreams. And if those dreams are the extinguished, the economy won’t create the jobs you need when you come out of school.”

Romney spent half of his speech addressing questions from the audience, topics ranging from birth control to the housing market.

When an audience member asked about free birth control, Romney said he did not believe in handouts.

“If you’re looking for free stuff, vote for the other guy,” he said. “That’s not what I’m about.”

On Planned Parenthood, Romney said he believed government should not aid in its funding.

“The government should not tax these people to pay for Planned Parenthood,” he said. “I’m going to cut from our federal spending some things you like and some things you’re happy to get rid of.”

Romney also addressed a question about improving education in the United States, saying better teachers, not smaller classrooms, are the solution.

“We’ve got to get the teachers’ unions out of the way so we can put our teachers, and the kids, first,” he said.

As for higher education, the best way to lessen the student debt crisis will be a stronger economy, he said.

“The best thing I can do for student debt is get you a good job when you come out,” he said.

The final audience question Romney addressed was about the prospect of drilling for domestic oil.

“We have oil across this country and under our oceans,” he said. “We’ve got about 100 years of natural gas supply. Let’s get that gas piped. And by the way, let’s of course bring that pipeline in from Canada, the Keystone Pipeline.”

Despite varying political views, students said having a presidential candidate on campus was exciting.

“I think it’s an honor that he came here, especially being such a small school. It shows the prestige of Bradley,” said Vice President of Bradley’s College Republicans chapter, junior Mary Kanowsky.

Sophomore public relations major Rickey Hendon said while he did not agree with everything Romney said, he enjoyed hearing him speak.

“I’ve always been an Obama supporter, and that hasn’t changed, but [Romney] had some good points,” he said. “I liked the point he made about Planned Parenthood, but Obamacare helps more people than I think he gives it credit for.  At the end of the day, this is a country of people, not companies.”

“I thought it was great. I liked his ideas with education, and I think it’s really good that he’s talking about not giving handouts,” he said.

Other students said they were concerned by Romney’s thoughts on women’s healthcare.

“I had a group next to me who were very vocal about their thoughts on Planned Parenthood,” said junior health science major AJ Warden-Michl. “What they don’t understand is that providing these services lessens the need for abortions.”

“I’m concerned about his segue from Planned Parenthood to budget cuts because women’s health cannot be compromised,” she said.

“I thought it was incredible to have a presidential candidate come to campus,” she said. “I think it’s really good to get exposed to the political process…The more College Republicans can do to bring [politicians] like this to campus, the more Bradley students might become politically active.”