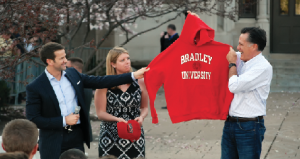 Three days later, Romney spoke in front of more than a thousand students, community members, faculty and staff members as well as representatives from local and national media.

United States President Barack Obama also made a stop at Bradley during his time as an Illinois senator in 2005.

“I thought it was a really good opportunity,” said senior history Emily Racetter. “[I’ve] been to other political debates last year and no one was there. But [at Romney’s event] there was a very big crowd, even from community members.”

The Bradley University College Republicans, which sponsored Romney’s visit, and Romney’s political team reached out to local media and students.

Although Romney’s stop at Bradley happened on short notice, planning was involved to set up and organize the event. Epstein said he, Schock, Romney’s event planner and Bradley University Police Chief Brian Joschko toured campus on Saturday to find an ideal location for the event.

“They loved Bradley Hall,” Epstein said. “It was great backdrop for them and would also show Bradley.”

From there, Romney’s team coordinated the appearance. All equipment used for the event was provided by the team; including 250 chairs, media risers, tables, speakers and sound equipment, the stage and music.

To avoid student traffic, Founder’s Circle was closed off on Sunday and the stage was installed before the day was over. Although Bradley had little involvement in the set-up and organization of the event, boundaries were made.

“We set some parameters for the event and Romney team,” Epstein said. “One, it would not disrupt classes, and two, there should be [minimal] parking issues.”

Epstein said they tried to make sure access to Bradley Hall and sidewalks was not limited to students, however Romney and his team received access to a conference room in the Psychology department.

Present at the event were police officers from different departments to ensure not only the safety of the republican candidate, but Bradley students and community members in attendance.

“The Peoria Police Department, the Bradley Police and Federal Police are all here,” said Sgt. Robin Turner. “It’s a good sign that we’re concerned about the safety of everybody and to make sure everyone is safe.”

According to the Director of Institute for Principled Leadership Brad McMillan, more than 40 media organizations, both national and local, were at Founder’s Circle for the event.

“It has been a whirl wind of activities and events since we learned this weekend that Mitt Romney would be on campus,” McMillian said who served as the local political expert for visiting journalists. “Aaron Schock really went to bat for Bradley and it is great national media exposure.”

Prior to his visit to Bradley on Monday, Romney spoke at the University of Chicago and Charlie Parker’s Diner in Springfield earlier in the day.

“Anytime you can bring national speakers to the university that is a good thing,” Epstein said. “This is an experiential opportunity and an academic opportunity and that is very positive.”