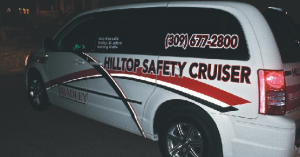 Bradley’s Hilltop Safety Cruiser is gaining attention and calls. What was only an idea a few months ago has turned into a growing safety program.

“I think the cruiser is a really good idea,” said freshman nursing major Jessica Demlow. “I think that a lot of students have been using it, too. We called it once but it was going to be a 20 minute wait for a ride.”

Although the program is still new to campus, the Chief of Police Brian Joschko said the Bradley University Police Department has noticed an increased use of the service on Friday and Saturday nights. So far this semester, the safety cruiser’s busiest night was Feb. 2 with 154 transports in 8 hours, more than 19 transports per hour.

“I think it is a great first step in making students feel more secure on campus,” said Director of Student Activities Tom Coy. “Especially with all of the safety concerns last semester.”

The program currently has 10 student drivers and one more in training. Joschko said because the program is still developing, they are unable to predict any possible changes that may come in the future.

“We are still evaluating the program and soliciting feedback,” he said. “While it has been incredibly successful, the program has only operated for just over 30 days.  It is too soon to determine what, if any, changes should be made.”

Although the program has been very successful, BUPD still offers police escorts before and after Hilltop Safety Cruiser hours of operation. In addition, Student Patrol walking escorts from Thursday nights to Sunday each weekend while classes are in session.

The safety cruiser is a uniquely marked Bradley van that provides shuttle transports to students, faculty and staff between the areas of Moss Avenue to Columbia Terrace and Western Avenue to Sheridan Road.

The Hilltop Safety Cruiser operates daily between 7 p.m. and 3 a.m. when school is in session during fall and spring semesters. Shuttle service is free for students with a student ID. Call the Cruiser for a ride at (309)-677-2800.