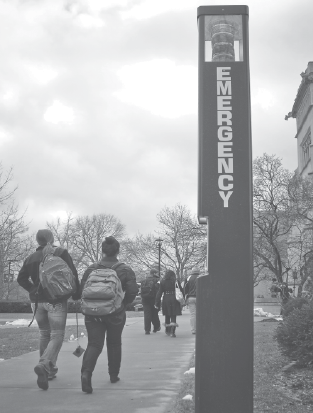 Two seniors on Student Senate are proactively working to make things brighter and safer for students who live off-campus.

For the past month, Student Senate City and Local Affairs Chair senior Ty Allemen and Justin Reeg, the campus safety chair, have been brainstorming ideas and meeting with local community officials in order to find ways to make areas of off-campus residences more safe.

“There have been longtime concerns that off-campus lighting has been insufficient, especially from a safety perspective,” said Reeg. “Multiple scholarly studies have indicated that improved street lighting can lead to a decrease in crime in the area. With the multitude of robberies, burglaries, property damage incidents that have occurred over the past few years in off-campus areas, I think that this project can have a significant impact on helping to deter crime that could take place in the future.”

Together, Allemen and Reeg agreed that not only should lighting be improved, but emergency safety posts should be installed on several streets located south of campus.

“The lighting is bad on off-campus streets where a lot of students live,” said Allemen. “And a lot of the crime that occurs is off-campus, rather than on-campus, where everything is lit.”

“[Spain] seems very excited to pursue this project and he would like to be on the commission that determines the feasibility for implementing the safety measures on the original resolution,” said Allemen. “As far as immediate action, Spain is going to set up a meeting with Chief Joshko and the Peoria Police Department Chief to go over the logistics of this project and get their opinion on the matter.”

In addition to Spain, Allemen and Reeg have spoken with the local Moss-Bradley Neighborhood Association and plan to speak with Bradley administration for support.

“The local neighborhood association was definitely behind the resolution,” Allemen said. “And we hope that this can also be a sustainability project for Peoria.”

On Wednesday, April 4th, Allemen and Reeg along with Spain will be speaking at the Moss-Bradley Neighborhood Association meeting for a second time.

“I didn’t anticipate [meeting with local officials and associations] but I don’t mind doing the extra work,” said Allemen. “I’d like to see [the resolution] pass before I graduate.”

Allemen said they plan to present an official resolution to Student Senate, proposing that Bradley administration address off-campus safety issues in the next few weeks. Senate members will then vote on the proposal and based on approval will be sent to the President’s Cabinet.